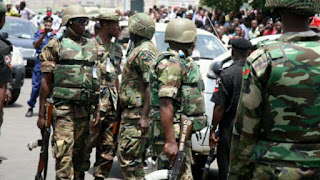 Nigerian Army image via The Guardian

A statement by the President General of Ohanaeze, Chief Nnia Nwodo, signed by his media aide, Emeka Attamah, said: “The attention of Ohanaeze Ndigbo Worldwide has been drawn to a worrisome invasion of towns and villages in the hinterlands of Igboland by innumerable soldiers.

“Reports reaching us indicate that the supposed soldiers are clothed in Nigerian Army uniforms without name tags.

“The danger in the present circumstance is that no one is sure any longer as to the true identity of the people in army uniform and that they can carry out nefarious activities without anybody being held responsible.

“We call on the international community to observe this anomaly, which is capable of derailing the nation’s democracy.

“We call on Ndigbo to discountenance any policeman or soldier without an identifiable name tag, as he/she must be up to some mischief.

“We call on all prospective voters to draw the attention of election observers to this anomaly, while calling on all voters not to succumb to their obvious intimidation tactics and to come out and vote according to their conscience.”
Igbo News Desk Nigeria The Guardian 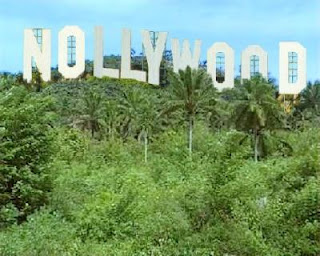 The Federal Government has approved N300 million out of the three billion naira intervention fund for capacity building to boost the Nigerian film industry. This is contained in a statement issued in Abuja on Sunday by Paul Nwabuikwu, Spokesman for the Minister of Finance and Coordinating Minister for the Economy, Dr Ngozi Okonjo-Iweala. ``Action on the three billion naira support promised the Nigerian film industry by President Goodluck Jonathan has formally commenced with the roll out of a N300 million capacity building fund.’’ The statement noted that the capacity building fund was the first of a series of initiatives planned under ``Project Act Nollywood’’, adding that It was made up of two components. According to the statement, the first component is a Training Fund of N150 million, dedicated to training and skills acquisition for Nollywood practitioners in all competencies along the entire value chain of the industry. The statement said it include; scriptwriting, dire