Nigeria in last day of campaigning warned to 'choose wisely' 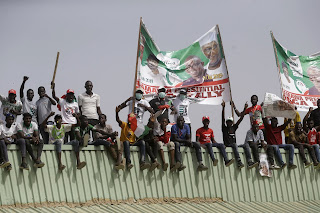 Supporters of Nigerian presidential candidate Atiku Abubakar, of the People's Democratic Party attend an election campaign rally on the street in Yola, Nigeria, Thursday, Feb. 14, 2019. Nigeria goes to the polls on Saturday to elect a new president. (AP Photo/Sunday Alamba)

KANO, NIGERIA (AP) — Nigeria surged into the final day of campaigning ahead of Saturday’s election, as President Muhammadu Buhari made one last pitch to stay in office while top challenger Atiku Abubakar shouted to supporters: “Oh my God! Let them go! Let them go!”

A day after the candidates pledged before diplomats, election observers and the nation to contribute to a peaceful vote in Africa’s most populous country, the scene in Abubakar’s home state of Adamawa on Thursday was raucous, with supporters echoing some of the dire warnings his party continues to issue.

“Buhari wants to kill us,” said Abubakar supporter, Mohamed Abubakar, as others rallied in the dusty streets and clung to moving vehicles in one last show of force. “We need change!”

“A sick narrative has emerged, one of systemic and systematic rigging, manipulation of the true record of the voters’ register,” party chairman Uche Secondus told a news conference in the capital, Abuja.

He also alleged “a coordinated approach to register foreigners” as voters. A commission spokesman did not respond to requests for comment.

Such talk threatens to raise the temperature in what is seen as a close contest between Abubakar, a former vice president, and Buhari, a former military dictator who took office again in 2015 while calling himself a reformed democrat. “I have to do things differently,” he tweeted on Thursday, noting his “young and rather ruthless” past.

While the 2015 election was one of the most peaceful in Nigeria’s history, others have been marred by deadly violence along religious and regional lines in the country of more than 190 million people.

Buhari, like Abubakar a Muslim from the north, made a call for calm in a final televised address to the nation ahead of the vote.

The president vowed “safety and full protection” for foreign election observers, diplomats and others. His government has been under pressure over recent comments criticizing so-called foreign interference, including a comment by one governor of sending people home in body bags.

Buhari urged Nigerians not to let differences “drive us to desperation” and made a special plea to the booming youth population, hurt especially by widespread unemployment, to not let themselves be used for violence.

Nigeria’s more than 84 million registered voters now must choose between Abubakar, who pledges to wrest certain powers away from the federal government but is dogged by corruption allegations, and Buhari, who talks up agriculture and infrastructure but faces criticism for his performance on security and the economy.

The president’s address dismissed what Nigerians call “stomach infrastructure,” the handouts of rice and other basics for a cheap win while failing to deliver on substantial promises of change.

In the northern city of Kano, not far from Buhari’s home state of Katsina, some of his supporters appeared almost serene in contrast to the street chaos on Abubakar’s last day of campaigning.

“He is not that kind of person who believes in do-or-die elections. He is a free man with a good heart,” said one Buhari supporter, Abdulaziz Maidubji.

“Nothing will happen in the north,” he said. “We are people of faith.”