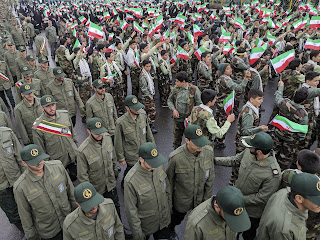 TEHRAN, IRAN (AP) — Hundreds of thousands of Iranians poured out onto the streets of Tehran and other cities and towns across the country, marking the date 40 years ago that is considered victory day in the country’s 1979 Islamic Revolution.

On Feb. 11 that year, Iran’s military stood down after days of street battles, allowing the revolutionaries to sweep across the country while the government of Shah Mohammad Reza Pahlavi resigned. It was also the day that Ayatollah Ruhollah Khomeini declared Iran an Islamic Republic.

On Monday, crowds streamed from a dozen of the capital’s far-flung neighborhoods to mass in central Tehran and Tehran Azadi, or Freedom Square, waving Iranian flags and chanting “Death to America” — a chant that has been standard fare at anti-U.S. rallies across Iran.

Downtown Enghelab, or Revolution Street, was decorated with huge balloons and loudspeakers blared out revolutionary and nationalist songs to encourage people to join the rallies.

This year’s anniversary comes as tensions are rising with the United States and Iran is grappling with the aftermath of President Donald Trump’s pullout last May from the 2015 nuclear deal between Iran and world powers and tough U.S. economic sanctions re-imposed in November on Tehran.

One of the people in the crowd, 27-year-old medical student Hossein Hosseinpour, walked with his wife and their 18-month son Amir Ali. He said he wanted to teach his son to support the revolution.

“I see a bright future for him and our nation,” Hosseinpour said.

Mahmoud Hemmat, 35, was pushing his 68-year-old mother, Parivash Fakheri, in a wheelchair, to the rally. “My mother, despite her illness, asked me to bring her out,” he said.

Fakheri, who was one of the revolutionaries on the streets of Tehran 40 years ago, said she would defend the revolt all over again.

“I am a retired and I know there are many economic problems today, but that is something different from our revolution,” she said. “It has been moving forward over the past 40 years and making Iran stronger.”

Along with the chants “Death to America,” Monday’s marches were also a backdrop to the military’s display of Iranian-made missiles, which authorities showcase every year during the anniversary celebrations.

Last week, Supreme Leader Ayatollah Ali Khamenei defended the “Death to America” chants but said they are aimed at America’s leaders and not its people.

The Iranian people “will not stop saying ‘Death to America’ as long as the U.S. acts malicious” toward Iran, Khamenei said, referring to Trump’s State of the Union address in which the American president, among other things, said: “We will not avert our eyes from a regime that chants death to America.”
AP News Iran News Desk Society
Reactions: