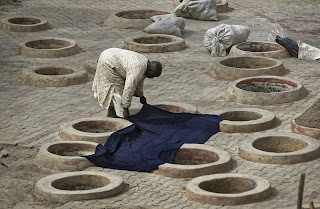 In this photo taken Tuesday, Feb. 19, 2019, a craftsman lays indigo-dyed cloth to dry over some of the ancient dye pits of Kofar Mata in Kano, northern Nigeria. The dye pits were founded in 1498 and are said to be the last ones of their kind but some of the craftsmen grumble about competition from Chinese fabrics that have entered the markets and sell for half the price. (AP Photo/Ben Curtis)
BY CARA ANNA

KANO, NIGERIA (AP) — A little indigo, a handful of ash and time. The dye pits in Nigeria’s ancient northern city of Kano are said to be the last ones of their kind after five centuries of existence.

Many pits at Kofar Mata appear to be abandoned as the sons who inherit the tradition decide to pursue government jobs or other business instead, forgetting the skills passed down through generations. The men who remain, squatting over the pits with sturdy gloves and endless patience, produce the intensely blue fabrics that are internationally renowned.

The homespun cloth, hung to dry on razor wire topping the walls around the pits, ranges from sky blue to darkest night and comes in romantically named designs: moon and shadow, moon and star, three baskets (standing for wealth, education and power).

The dye pits, founded in 1498, attracted travelers and traders from across the vast Sahel region to the Kano emirate, helping to make the city one of the most prosperous in West Africa at the time. The fabrics are still used today by the nomadic, well-wrapped ethnic Tuareg, whose skin often takes on a blueish tinge from the dye that hasn’t been “fixed.”

The preparation of the indigo dye takes up to a pungent month, then fabric is soaked for up to several hours for the darkest hues. The men periodically lift the fabric from the pits to drip, saying the process needs to breathe. A dash of potassium holds the color in.

He dipped his fingers into the blue-tinged foam and licked them, then smiled. “Smells like chicken,” he said. Indigo also makes a good medicine, he asserted.

Some craftsmen grumble about competition from Chinese fabrics that have entered the markets and sell for roughly half the price, saying they are lower quality and quickly fade.

“God make Buhari to help us,” said one artisan, Ibrahim Ahmed Ibrahim, who urged Nigeria’s president to impose high tariffs on imported textiles, similar to the ones his administration has put in place for imported rice to promote local production. “Better our own,” Ibrahim said.

Buhari, who seeks a second term in Saturday’s election, has pointed to the success of the tariffs as he appeals to the scores of millions of Nigerians living in extreme poverty. But some say it is too little, and too slowly.

Ibrahim’s colleague Ismailu acknowledged that the “money has gone down” in their shrinking industry, lamenting that “too much technology” is used by upstart textile competitors.

The effects are felt beyond the dye pits, said Idayat Hassan, director of the Center for Democracy and Development in Nigeria’s capital, Abuja. “This is eroding culture. It’s taking away market and it’s increased unemployment in some sectors.”

Still, the indigo cloth continues to attract the rich and royal from the Kano emirate who have a taste for the past.

For those seeking something flashier than the mallet-pounded homemade fabrics, a separate area in the back is for dyeing finer cloth from packages stamped “Made in Germany” or Britain, at prices of 25,000 naira ($69), which is purchased by Nigeria’s so-called “big men.”

Although many of the abandoned traditional pits appeared to be choked with debris, Ismailu said they are maintained in case of a revival: “We take care.”