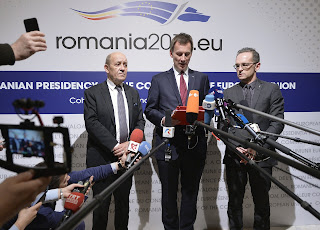 BUCHAREST, ROMANIA (AP) — European Union foreign ministers raised concerns Friday about the spread of nuclear weapons as the United States readied to pull out of a key Cold War-era treaty, blaming Russia for violating it.

The Trump administration is poised to announce later Friday that it is withdrawing from the Intermediate-Range Nuclear Forces treaty that the U.S. agreed with the Soviet Union in 1987. The pact bans production, testing and deployment of land-based cruise and ballistic missiles with a range of 500-5,500 kilometers (310-3,400 miles).

EU foreign policy chief Federica Mogherini called on both sides to stick to the treaty.

“What we definitely don’t want to see is our continent going back to being a battlefield or a place where other super-powers confront themselves. This belongs to a faraway history,” Mogherini told reporters in Romania.

The Pentagon has shared information with NATO allies asserting that Russia’s new 9M729 missile system falls within the treaty. It believes the ground-fired cruise missile could give Moscow the ability to launch a nuclear strike in Europe with little or no notice.

Moscow insists the missile has a range of less than 500 kilometers.

In October, President Donald Trump warned that the U.S. would abandon the treaty because of alleged Russian violations. If Moscow did not return to compliance, Washington said it would start the six-month process of leaving the pact from Feb. 2.

NATO-Secretary-General Jens Stoltenberg has said that Russia showed no sign as late as last week that it was willing to return to compliance in talks with allied ambassadors.

“The fear is to see proliferation, to see nuclear weapons developed, which are weapons that are dangerous for the entire territory of Europe,” Belgian Foreign Minister Didier Reynders said.

“I hope that our American colleagues, including outside the treaty framework, are going to keep working on this dialogue with Russia,” he said. “It’s not by leaving the multilateral framework that we’re going to succeed in having greater pressure or efficiency in the fight against nonproliferation.”

The Europeans are keen to avoid a repeat of the missile crisis in the 1980s. NATO allies decided to deploy U.S. cruise and Pershing 2 ballistic missiles in Europe in 1983 as negotiations with Moscow faltered over its stationing of SS-20 missiles in Eastern Europe.

“I see it not only with concern but with regret that the INF should belong to the past,” said Austrian Foreign Minister Karin Kneissel. “You can negotiate a free trade agreement in five years but disarmament negotiations, they absorb generations of negotiators. Sometimes you have 40 years of negotiations going on.”

Ministers from the Baltic countries close to Russia’s borders — Lithuania, Latvia and Estonia — were mostly in support of the U.S. move and blame Russia.

Lithuanian Foreign Minister Linas Antanas Linkevicius said that losing such a treaty always means “less stability, more uncertainty, definitely it’s bad. But I’m saying what is the option, what is the recipe to say that countries must comply (with) the agreements they made?”