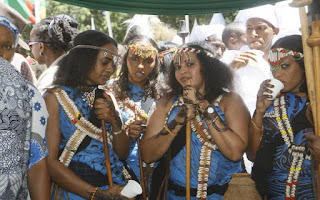 Food and drinks were freely shared and dress codes were exchanged between strangers, who turned into instant friends. Image via The Satandard

NAIROBI, KENYA (SUNDAY STANDARD)--“Gods are not crazy anymore. They were back then in the past,” was the opening joke by Botswana’s Lieutenant Colonel Silas Molebi.

The joke alluded to the popular classic film, the Gods must be crazy that was set in Botswana.

But the humorous response by Lt Col Molebi was a reaction to a tease from Kenyan audiences who attended the Defence Staff College cultural day in Nairobi.

It was a mark of ease during the cultural event where defence staff led the exhibition of cultural diversity from eight countries in Africa. The countries hosted by Kenya were Botswana, Burundi, Egypt, Rwanda, Tanzania, Uganda and Zambia.

From sweet music and dances at the event, sampled traditional delicacies from the countries reached every salivating tongue.

Eyes were met with appealing colours that reflected the beauty of the continent.

Despite being a no-nonsense military zone, Africa’s welcoming warmth drove top military echelons into all smiles as they mingled with civilians who attended the function at the Defence Staff College in Nairobi’s Karen.

Each country had a tent to showcase its traditional foods, drinks, clothing, traditional armory and beauty artifacts.

And in an ambitious foreshadow of the Africa’s dream of a border-less continent and free from restrictive visa regulations, attendants from various countries crisscrossed each other and freely interacted with other cultures.

Food and drinks were freely shared and dress codes were exchanged between strangers, who turned into instant friends.

Burundi stood out with its special music drum locally called umunganaro that Lieutenant Colonel Alain Maniriho said was treasured since it was only played once a year during harvest.

Egypt stood out with artifacts of gods and the pyramids considered one of the seven wonders of the world.

Other citizens scrambled for the sweet insongo wine from Rwanda made from sorghum alongside lots of beer from Tanzania, offered by Swahili speaking representatives.

Zambia, which branded itself as a ‘beacon of peace’ and ‘home of Victoria falls’ treated its guests with fried and dried caterpillar delicacy. On another tent, citizens from other countries emptied the waragi bottles from Uganda, with readers of Barbara Kimenye of the Moses series asking if Mr Kigali, the school gatekeeper in the children books was still partaking of the same.

Kenya on its part, utilised the home advantage and showcased several cultures based on communities. The Maasai stood tall with their exciting dances and morans with red painted heads and spears. Lieutenant Colonel Peter Okeyo from Defence Staff College in Nairobi said the annual event has been happening for the last 34 years.

“It happens yearly in all the countries you see here. We bring people’s cultures together,” he told the Sunday Standard.
Africa Kenya News Desk Society