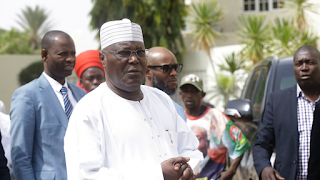 Nigerian presidential candidate, Atiku Abubakar, of the People's Democratic Party, speaks to journalists after the presidential election was delayed by the Independent National Electoral Commission, at his residence in Yola, Nigeria Saturday, Feb. 16, 2019. A civic group monitoring Nigeria's now-delayed election says the last-minute decision to postpone the vote a week until Feb. 23 "has created needless tension and confusion in the country." (AP Photo/Sunday Alamba) 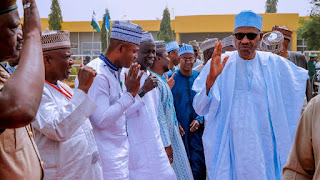 In this photo released by the Nigeria State House, Nigeria's incumbent President Muhammadu Buhari, of the All Progressives Congress party, right, greets supporters as he departs from Daura, Nigeria, bound for Abuja, following the postponement of presidential elections, Saturday, Feb. 16, 2019. Nigeria's presidential candidates on Saturday condemned the last -minute decision to delay the presidential election until Feb. 23. (Bayo Omoboriowo/Nigeria State House via AP)

KANO, NIGERIA (ASSOCIATED PRESS) – Africa's most populous country goes to the polls on Saturday to decide whether President Muhammadu Buhari deserves a second term. While more than 70 people are running to lead Nigeria, the close race comes down to Buhari and a billionaire former vice president, Atiku Abubakar.

Here is a look at the top candidates, who both come from the country's largely Muslim north and have chosen Christian running mates from the other traditional power bases, the southeast and southwest.

The 76-year-old former military dictator who ruled in the mid-1980s now says he regrets his ruthless past. Many Nigerians, remembering his reputation for sometimes harsh discipline, cheered when he unseated incumbent President Goodluck Johnathan in 2015, hoping Buhari would follow up on his vows to tame widespread corruption and defeat a deadly Boko Haram extremist insurgency.

But his term has been difficult. Nigeria's heavily oil-dependent economy, the largest in Africa, fell into a rare recession when global crude prices crashed. The recession is over but growth remains slow, and while Buhari points to progress in agriculture and infrastructure, many people grumble that both prices and unemployment are painfully high.

Meanwhile, while the military under Buhari has pushed Boko Haram from many communities in the northeast, a new faction pledging allegiance to the Islamic State group has made a deadly resurgence in recent months, displacing tens of thousands of people in one of the world's most dire humanitarian crises.

The president spent more than 150 days of his term outside the country for medical treatment, and questions about his health remain as he keeps public appearances brief. "I feel he is not fully OK. He should go and rest," said Anna Eguaoje, a businesswoman in Kano. "The other one is old too, but more energetic," said Caroline Inyanda, an airport worker in the same city.

The 72-year-old rose from a tax officer to become Nigeria's vice president between 1999 and 2007, a period in which he was targeted with corruption allegations that have never faded.

After a childhood in which he defied his father to pursue an education, Abubakar discovered his entrepreneurial side and moved from the customs service into a life of business and politics. He points to his business empire, claiming some 50,000 employees, as evidence of the wealth he hopes to bring to fellow Nigerians.

Widely known as Atiku, he has said he wants to create 2.5 million jobs annually and lift at least 50 million people from poverty. Privatizing Nigeria's state oil company is one of his goals.

But one analyst noted that a privatization program mainly supervised by Atiku while vice president was a failure. "Most of the privatized assets are still relying on the Nigerian government for bailouts, especially the power sector," said Sylvester Odion-Akhaine, a political science lecturer at Lagos State University.

Saturday is Abubakar's fifth run at the presidency. Last year he jumped from the ruling party to the opposition People's Democratic Party to take on Buhari, part of a wave of recent high-profile defections.