Windsor Man Convicted Of Keeping His Wife As A Sex Slave 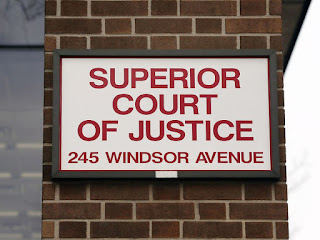 The man, who cannot be named to protect the identity of his wife, abused his position of power during his nine-week marriage, Superior Court Justice Paul Howard said before delivering his judgment in a Windsor courtroom.

On numerous occasions, the man made calls to cancel his sponsorship application for his wife’s immigration to Canada, only to reinstate the application once she did what he told her to, Howard said during his summary of the six-day September trial.

A failed refugee claimant from Nigeria, the woman sought asylum in Canada in 2013 in an attempt to protect her daughter from a female genital mutilation ceremony that required the mother to be present, court heard.

In 2015, while living in Brampton, she met the man through the online dating site Plenty of Fish. Less than a week after their first face-to-face encounter, she moved into his Windsor home, and married him within the month.

Both she and the man were looking to settle down and start a family. Only after they were married did the man begin extorting his wife for sex, the judge said.

“The threats were specifically directed to induce the complainant to perform oral sex on him, or have intercourse with him, when she otherwise did not want or consent to do so,” Howard said.

The judge said he believed the man committed acts of sexual assault and extortion on multiple occasions, but ruled there was only enough evidence to convict him of one count of each.

The man was found not guilty of five other charges — two of sexual assault, two of extortion, and one of assault, all relating to his relationship with his wife.

The matter was put over to assignment court Feb. 8 for a future sentencing date.