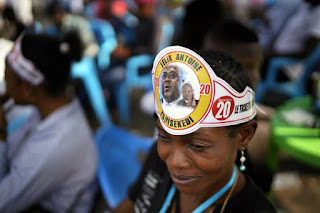 Supporters of Congolese President elect Felix Tshisekedi sell souvenirs outside his party headquarters in Kinshasa, Democratic Republic of the Congo, Wednesday Jan. 23, 2019. Tshisekedi is to be inaugurated Thursday Jan. 24, 2019, having won an election that raised numerous concerns about voting irregularities amongst observers as the country chose a successor to longtime President Joseph Kabila. (AP Photo/Jerome Delay)


KINSHASA, CONGO (AP) — Congo is set to inaugurate an opposition leader as its unexpected new president in the Central African country’s first peaceful, democratic transfer of power since independence nearly 60 years ago.

The 55-year-old Felix Tshisekedi, son of the late opposition icon Etienne, will be sworn into office on Thursday at the Peoples’ Palace, the seat of the national legislature in the capital, Kinshasa.

Several African heads of state are expected to attend the ceremony, putting aside reservations over alleged election fraud that brought Tshisekedi to power.

Many Congolese hope that Tshisekedi will bring change after 18 years of rule by President Joseph Kabila. However, Tshisekedi must work with a legislature dominated by members of Kabila’s ruling coalition.