Central Leaders Jostle To Take Over From Uhuru 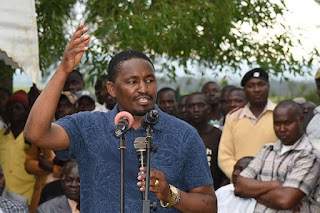 NAIROBI (DAILY NATION)--Ever since President Uhuru Kenyatta began his second and last term in office, leaders in Central have been jostling for political influence in the region.

Encouraged by the President’s imminent retirement in 2022, politicians are fighting to succeed him as the regional kingpin as they seek to advance their chances of becoming running mates to presidential aspirants from other regions.

The competition is quite but vicious, with each protagonist putting a deliberate effort towards raising his political profile.

Mr Kiunjuri is the only CS who is a politician from the region and his appointment was seen as a deliberate effort to accord him visibility with the 2022 succession in mind.

His critics argue that despite the position, he has been unable to establish himself. But his supporters disagree.

Mr Kenneth, who in 2013 was President Kenyatta’s competitor, has been seen a potential kingpin due to his character which portrays him as a sober and mature leader, although critics say one of his shortcomings is the lack of a formidable presence.

For his backers and pundits, having run a presidential campaign in 2013, the former Gatanga MP has already packaged himself as a national leader unlike others who have confined themselves to local politics.

Murang'a Senator Irungu Kang’ata, with a disclaimer that he was not endorsing anyone, said Mr Kenneth has better chances than the rest, saying “he is a good and a potential leader” but requires grooming.

Mr Wa Iria, the only governor serving a second term in the region, is said to be among leaders behind Civic Renewal Party (CRP), a new political party he might use to further his political agenda after 2022.

Though the governor has not been absolute on his next move, he said in January last year that he had set his sights on the 2022 election campaign and was angling himself to assume a bigger role.

“We are focused on delivering our 2017 promises. But of course, I will be eyeing a national post when the right time comes,” he said.

During the campaigns for the repeat presidential election in 2017, the governor launched ‘Taifa la Jubilee’, a campaign machinery that saw him campaign in and out of central Kenya.

Mr Kabogo has kept a low profile since his loss to Mr Ferdinand Waititu, but he is back, and other than attending political functions in Kiambu, has been hopping from one media house to another giving live interviews.

Mr Kuria, the controversial Gatundu South MP who was early this month bashed after he said the president had neglected the region, is also believed to be eyeing the position.

Though the MP later apologised, the majority of the electorate in the region saw him as a hero for speaking his mind.

The MP, through the Crops Amendment Bill, has also been pushing for the revival of coffee sector, a move which pundits opine that, if successful, could boost his popularity.

But Prof Peter Kagwanja, a political analyst, has dismissed the lot offhand, saying of all those eyeing the position, none of them have qualities that befits a kingpin.

He argues that some of them stand for nothing that would be of help to the region while others are failures who have no grip on their constituencies.

According to the former Government Adviser and currently Chief Executive of Africa Policy Institute, the president should retain the position even after retiring because, presently, no one else has the qualities of a kingpin.
Africa Democracy Kenya Politics