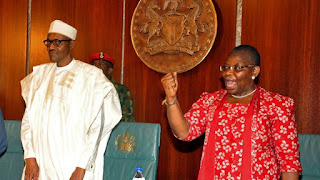 In this Wednesday, July 8, 2015 file photo, Nigerian President Muhammadu Buhari, left, stands next to Oby Ezekwesili, a coordinator of the 'Bring Back Our Girls' campaign, at the presidential residence in Abuja, Nigeria. The woman who led the global campaign to free Nigerian (AP)
BY CARA ANNA

ABUJA (ASSOCIATED PRESS)--Nigeria has slid into a constitutional crisis three weeks before the presidential election after President Muhammadu Buhari suspended the country's chief justice, a key player in what likely will be a disputed vote affecting the lives of some 190 million people. The president's rival calls the suspension "an act of dictatorship" meant to influence the election.

Africa's most populous country already faces multiple challenges as it tries for a second consecutive democratic transfer of power on Feb. 16 after decades marked by coups. Here's a look at what's at stake.

Nigeria is Africa's largest oil producer but its economy is sluggish and corruption is widespread. A rich elite dazzles in seaside Lagos, the continent's largest city, but most of the country struggles to get by. In a too common scene, at least a dozen people died earlier this month when an overturned oil tanker exploded in the south while scores of people were scooping up the leaking fuel to use at home.

Many Nigerians were dismayed last year by reports based on data by the World Poverty Clock saying their country had surpassed India with the largest number of people living in extreme poverty. A changing climate in the arid north is already pushing some people toward the heavily populated south in search of the means to survive.

The Boko Haram extremist group and an offshoot affiliated with the Islamic State group are making a deadly resurgence in the northeast despite declarations by Buhari's government that Boko Haram had been crushed. The government has noted the extremists' worrying new use of drones.

A separate conflict in central Nigeria has become even deadlier, with fighting between farmers and herdsmen over scare resources killing some 1,300 people in the first half of 2018 — six times more than those killed by extremists, according to the International Crisis Group. The conflict between the largely Muslim herders and largely Christian farmers is a sensitive issue for Buhari, a Muslim and ethnic Fulani from the north who is accused by some of not doing enough to end the fighting.

Meanwhile, oil militants in the south and bandits in the northwest continue to pose a deadly threat.

In a year of several major elections in Africa, people across the continent are watching to see how Nigeria's will unfold. It did not help confidence when neither Buhari nor his main challenger, former vice president Atiku Abubakar, showed up for a presidential debate last week.

Buhari's win in 2015 was a rare peaceful power transfer in Nigeria, the powerhouse of West Africa, a region that has been trending toward stable elections. Already the United States and Britain, worried about vote-buying, heated rhetoric and intimidation, are warning against election-related violence. The countries have threatened visa restrictions, severed access to U.K.-based funds and prosecution for those who undermine the vote.

The crisis that erupted Friday night over the suspended chief justice, who faces corruption allegations, has infuriated the main opposition People's Democratic Party, which on Saturday stopped campaigning for 72 hours in protest.

"Both parties appear to be laying the groundwork for declaring the election results fraudulent if they lose," John Campbell, a former U.S. ambassador to Nigeria, wrote for the Council on Foreign Relations on Friday.

Now many Nigerians worry that any legal challenge to the vote could be compromised if the judicial system itself is in disarray.