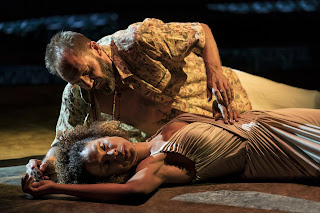 In this undated photo released by The National Theatre, a scene from the London National Theatre production of Antony & Cleopatra starring Ralph Finnes, top, and Sophie Okonedo, starring as the lovers rocked by war and empire. The tale of a tragic romance by William Shakespeare, directed by Simon Godwin, has two top-flight actors and a live snake, no wonder it's a hit show. (Johan Persson/National Theatre via AP

Sophie Okonedo and Ralph Fiennes play the lovers sundered by war and empire in William Shakespeare’s tragedy, which is being broadcast live to movie theaters in Britain and internationally on Thursday as part of the NT Live series.

Fiennes says one reason the play endures is that the characters of the Roman military hero and the Egyptian queen are — strange as it seems — so relatable.

“We can relate to the messiness of the relationship,” Fiennes told The Associated Press. “They’re not young lovers. They’re mature. They’ve both got baggage.”

Fiennes is an old hand at Shakespeare who won a Tony Award for playing “Hamlet” and directed a film version of “Coriolanus.” He says the play’s power comes from the combination of Shakespeare’s “poetic, epic” language and “two very fallible people.”

The production reunites Fiennes with director Simon Godwin, who directed him in George Bernard Shaw’s “Man and Superman” at the National Theatre in 2015.

It’s his first time working with “Hotel Rwanda” star Okonedo, and he praises her “rawness” and emotional range as the besotted queen

Cleopatra is the play’s glamour part, Antony a more muted starring role. Reviewers have called Okonedo fiery, funny, regal and playful, while Fiennes has been praised for playing Antony as a “creaky” figure in “tragic decline.”

His Antony is a hedonistic hero — repeatedly drawn back from duty in Rome to Cleopatra’s lush Alexandrian retreat — who is reluctant to admit that his best days are behind him.

“He’s a man who’s trying not to be past his peak,” Fiennes said. “You feel he’s someone who is letting himself go in Egypt. Enjoying himself, but he’s let his responsibilities go.”The play’s climax — Cleopatra’s suicide by asp — is staged with a real snake. Fiennes says cast and crew ensure that the reptiles — there are four who alternate in the role — are “very well looked after.”

At 55, Fiennes is experiencing one of the richest phases of his career. For years he was a go-to bad guy, receiving an Academy Award nomination for playing a Nazi concentration camp commander in “Schindler’s List” and terrorizing young wizards as Lord Voldemort in the “Harry Potter” film series. More recently he’s explored a flair for comedy in films including “The Grand Budapest Hotel” and “Hail, Caesar.”

Next year he’ll return to the cloak-and-dagger world of James Bond for a third outing as spymaster M.

Fiennes is not about to let any 007 secrets slip. He says Bond filming — delayed by the departure of director Danny Boyle and his replacement by Cary Fukunaga — is supposed to start in spring. He insists he has yet to see a script.

He laughs when asked what genre he wants to explore next.

“You really hope that a script comes through the door which is something that you’d never dreamed of being asked to play,” he said. “That was the case with ‘The Grand Budapest Hotel.’ I was delighted and surprised that I was being asked to play this character. So I’m just waiting to see what might come my way.”