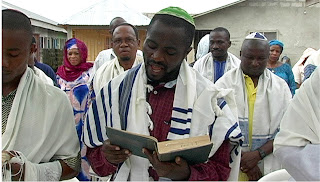 The Jews of Nigeria image via Heart Productions

UMUAHIA (THE JEWISH PRESS)-The police in Umuahia, capital of Abia Southeast part of Nigeria, on Wednesday arrested 51 persons suspected of membership in the illegal Biafran separatist organisation Indigenous People of Biafra (IPOB), who claimed to be Jewish, the Nigerian newspaper Vanguard reported.

Police Superintendent Geoffrey Ogbonna said the suspects, 41 men and 10 women, were arrested for possession of illegal IPOB insignia. They held a procession on major streets in Umuahia, and were carrying placards with inscriptions written in “Jewish Language,” presumably Hebrew.

The protesters were dressed in “religious white attire with small caps,” similar to those of the Jews, the Vanguard reported.

Igbo Jews are members of the Igbo people of Nigeria who practice a form of Judaism. The Igbo people are one of the largest ethnic groups in Africa. The Igbo homeland is divided into two unequal sections by the Niger River.

The Igbo Jews either adopted Judaism in recent centuries, or are descendants of the Jews of Bilad el-Sudan, West African Jewish communities who were connected to known Jewish communities from the Middle East, North Africa, or Spain and Portugal, and continued to exist for hundreds of years after the 1492 expulsion.

The protesters were intercepted by riot police, who shot several teargas canisters at the procession, a move that caused a stampede at the local Isi Gate Market as “traders, shop owners, passers-by and motorists ran in different directions for safety.”

The Isi Gate” market in Umuahia was established during the colonial era, and has since survived attempts by successive Nigerian administrations to tear it down what they considered an eyesore that made the provincial capital “look like a slum.”

The procession began in a neighborhood of the clan of Afaraukwu, birthplace of IPOB leader Nnamdi Kanu. It was dispersed at Isi Gate.

Kanu disappeared from public after his home was raided by the Nigerian military in September 2017.

The Nigerian Civil War, commonly known as the Biafran War (July 6, 1967 –January 15, 1970), was fought between the government of Nigeria and the secessionist state of Biafra. The conflict was the result of political, economic, ethnic, cultural and religious tensions which preceded Britain’s formal decolonization of Nigeria from 1960 to 1963. It followed a 1966 military coup, a counter-coup and the persecution of Biafrans living in Northern Nigeria. There was also the issue of who got to control Nigeria’s oil fields.

Between 500 thousand and two million Biafrans perished from starvation under the government’s total siege. In mid-1968, images of starving Biafran children saturated Western media and the plight of the starving Biafrans captured the headlines.

France and Israel supported Biafra, but were accused of selling weapons to both warring sides. Britain and the Soviet Union were the main supporters of the Nigerian government in Lagos.
Igbo Jews Newsroom Society