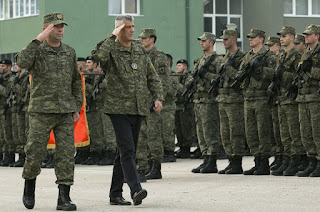 
BY FLORENT BAJRAMI
PRISTINA, KOSOVO (AP) — Kosovo’s parliament is convening to approve the formation of an army, a move that has angered Serbia which says it would threaten peace in the war-scarred region.

The 120-seat parliament on Friday will vote on three laws to turn the existing 4,000-member Kosovo Security Force into a regular, lightly armed army. Ethnic Serb lawmakers are expected to boycott the vote.

In a sign of defiance, Serbs in the north displayed Serbian flags on streets and balconies while NATO-led peacekeepers deployed on a bridge in the ethnically divided northern town of Mitrovica.

The U.S. Ambassador in Pristina, Philip S. Kosnett met on Thursday with the KSF commander “to underscore the U.S. Government’s commitment to the KSF’s evolution as a defensive force serving all of Kosovo’s communities and reflective of the country’s multi-ethnic character.”

“Let’s remember that a country’s security depends on the quality of its security relationships — and peaceful, mutually beneficial relations with its neighbors — as much as on the strength and professionalism of its armed forces,” he tweeted Friday.

The new army will preserve its former name — Kosovo Security Force — but now with a new mandate. In about a decade the army will have 5,000 troops and 3,000 reservists, essentially operating as a security force handling crisis response and civil protection operations.

Kosovo’s 1998-199 war ended with a 78-day NATO air campaign in June 1999 that stopped a Serbian crackdown against ethnic Albanian separatists.