Japan Begins Reclamation At Disputed US Base Despite Protest 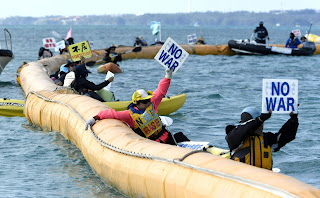 Protesters on canoes display placard as construction workers dumped a truckload of sediment on the ground and bulldozed it into the sea at Henoko on Okinawa’s east coast to build a runway for a Marine Corps base, Friday, Dec. 14, 2018. Japan's central government started main reclamation work Friday at a disputed U.S. military base relocation site on the southern island of Okinawa despite fierce local opposition. (Koji Harada/Kyodo News via AP)

Construction workers dumped a truckload of sediment and bulldozed it into the sea at Henoko on Okinawa’s east coast to build a runway for a Marine Corps base that will be relocated from densely populated Futenma in the southern part of the island. The central government has reversed Okinawa’s earlier ban on landfill work at the site.

Opponents of the relocation say it would not only be an environmental debacle but also ignore local wishes to remove the base.

“I resent it strongly,” Okinawa Gov. Denny Tamaki told reporters. “The central government is forcibly dumping the sediment into the sea and it does not even pay the slightest attention to the will of the Okinawan people.”

Tamaki calls the one-sided decision “illegal” and has repeatedly visited Tokyo, urging top officials in Prime Minister Shinzo Abe’s Cabinet to postpone the landfill work and engage in dialogue. Tamaki was in Tokyo on Thursday for talks with Defense Minister Takeshi Iwaya.

Dozens of people in rubber boats protested the move, hoisting placards. “Don’t kill the ocean,” one of the placards said. “No military base needed for Okinawa’s children,” another one read.

Many Okinawans say the presence of so many U.S. troops on the island is already a heavy burden and they want the existing Futenma air station closed and its replacement moved off the island entirely.

Tamaki, who was elected late September on his campaign promises to block the Henoko base and further reduce U.S. bases on the island, also visited Washington and New York last month to gain support for Okinawa from the American public and officials.

Washington’s position remains that the dispute should be resolved between Tokyo and Okinawa.

Officials in Tokyo said the Henoko plan is the only one feasible and they will stick with it despite protests.

“In order to maintain the deterrence of the Japan-U.S. alliance and to remove the risk of the Futenma air station, its relocation to Henoko is the only solution,” Chief Cabinet Secretary Yoshihide Suga told reporters Friday. He added that the central government will work toward reducing Okinawa’s burden of hosting U.S. troops and gaining understanding and cooperation from residents.

Tetsuro Fukuyama, a senior opposition lawmaker belonging to the Constitutional Democratic Party, criticized Abe’s government for pushing through with the base relocation.

The plan is to build a V-shape runway on the landfill for a targeted completion in 2022 as a replacement for Futenma after its closure. Iwaya said the plan is being delayed because of persistent protests and a planned Futenma closure by the target date seems difficult.

Many people on Okinawa, which was occupied by the U.S. 20 years longer than the rest of Japan, also feel they have been sacrificed for the mainland and have developed bitter feelings toward Tokyo. As the first person with an American parent to lead the island, Tamaki has hopes to encourage dialogue and bridge the gap on the issue between Japan and the U.S.

The relocation of the Futenma air station was planned after the 1995 rape of a schoolgirl in which three U.S. servicemen were convicted. The case ignited simmering Okinawan opposition to the U.S. bases.

About half of the 50,000 U.S. troops are based in Japan under a bilateral security pact and the majority of their key facilities are on Okinawa. Residents have long complained about base-related noise, pollution and crime.