The Latest: Kremlin Sees Little Chance Of Better US Ties 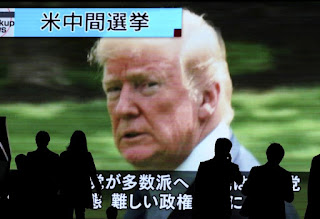 The Kremlin says the results of Tuesday’s midterm elections are not going to hurt ties between Russia and the U.S. because they are bad as it is.

Kremlin spokesman Dmitry Peskov told reporters on Wednesday that “it’d be hard to make (the relationship) even worse.”

Peskov refused to comment on a suggestion that the Democrats’ control of the House will make it more difficult for President Donald Trump to repair ties with Russia. He says, however, “there are no bright prospects on the horizon” for improving the relations.

A meeting between Trump and Russian President Vladimir Putin planned for next week in France has been scrapped.

Michael Oren, Israel’s deputy Cabinet minister for public diplomacy and a former ambassador to Washington, says the results made it more likely that President Donald Trump would turn to international diplomacy to reach a deal for the Israeli-Palestinian conflict.

Oren has told The Associated Press: “There is no issue which would have greater reverberations, not just on the right but in the center and maybe even on parts of the left that resolving the Israeli-Palestinian issue.”

He says the results have a two-pronged influence on Israel. The first is to view the Democratic retaking of the House as an opportunity for Israel to reach out again to Democrats and liberal Jews who overwhelmingly supported them after years of the Jewish state perceived as enthusiastically praising Trump. The second is to try and push for as many concrete solutions to its chief concerns — Iran, Syria and the Palestinians — while Trump remains in the White House.

Japanese officials say their alliance with the United States remains unshakable regardless of U.S. election results.

Democrats seized the House majority from the Trump’s Republican Party, while it gained ground in the Senate in Tuesday’s midterm elections, the first nationwide polls since Trump took office two years ago.

Nishimura says Japan will cooperate with the U.S. in efforts to denuclearize North Korea and in other areas.

He says, however, Japan won’t compromise on trade against its national interest if there is any change in a political climate in the U.S.

China says the relationship between the world’s two largest economies is so important that interests on both sides will continue pushing for cooperation regardless of the outcome of U.S. elections.

Foreign Ministry spokeswoman Hua Chunying declined to comment directly on the outcome but says “regardless of the result ... we believe the two governments and the two peoples all want to maintain the sound and steady development of bilateral relations because we believe it is in the best interests of the international community.”

President Donald Trump has slapped punitive tariffs on $250 billion in Chinese exports to the U.S. and threatened billions more. China has retaliated with tariffs on soybeans and other key U.S. exports. Frictions over Taiwan, human rights and the South China Sea have pushed relations to their lowest ebb in years.

Trump and Vice President Michael Pence have also accused China of seeking to meddle in the elections, prompting denials from Beijing.

Hua says China looks forward to a meeting between Trump and President Xi Jinping later this month at a G-20 summit in Argentina.

The Democratic victory in the U.S. House of Representatives could echo from Moscow to Beijing to Riyadh, with empowered Democrats now able to launch new investigations into President Donald Trump’s international business empire and his political dealings with the rest of the world.

Overturning control of the House in Tuesday’s midterm elections has given the Democrats a powerful weapon to wield against Trump: subpoenas whose reach could extend far beyond the White House and Washington.

It means Democrats could look into everything from Chinese trademarks granted to companies linked to Trump and his daughter Ivanka, to a probable reopening of the investigation into Russian interference in the 2016 election.
Associated Press Newsroom Russia United States