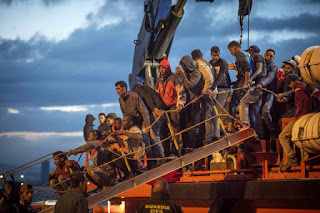 In this photo taken on Saturday, Oct. 27, 2018, migrants arrive at the port of San Roque, southern Spain, after being rescued by Spain's Maritime Rescue Service in the Strait of Gibraltar. Spain's maritime rescue service saved 520 people trying to cross from Africa to Spain's shores on Saturday. Also, one boat with 70 migrants arrived to the Canary Islands. Over 1,960 people have died trying to cross the Mediterranean to Europe this year, according to the United Nations. (AP Photo/Marcos Moreno)

MADRID (AP) — Spanish rescue workers combed the seas and shores of southern Spain on Tuesday, searching for 17 missing migrants a day after finding the bodies of 17 other migrants who died trying to cross the Mediterranean in boats departing from North Africa.


The Spanish Civil Guard said it had found four bodies of migrants and 22 survivors Monday, all men from northern Africa, after their wooden dinghy hit a reef close to the coast, west of the Strait of Gibraltar. The Civil Guard said 13 of the survivors were thought to be unaccompanied minors.

It also said 17 other people traveling were missing, but could have reached Spanish shores. The Civil Guard on Tuesday resumed the search for them both on sea and land.

Earlier on Monday, Spanish maritime rescuers found 80 people, including five women, and recovered the bodies of 13 dead migrants in the Alboran Sea, part of the western Mediterranean migrant route into Europe.

The migrants were traveling in two different boats, the Spanish Maritime Rescue Service said, adding that they were all transferred to the Spanish enclave of Melilla, which borders Morocco.

The U.N. says over 2,160 people have died trying to cross the Mediterranean to Europe this year, 564 of them trying to reach Spain.

At the Strait of Gibraltar on the western edge of the Mediterranean, Africa and Europe are only 14 kilometers (8.7 miles) apart but the waters there can be dangerous due to high winds and strong currents. Still, the short distance has made that route the most popular choice for migrants heading to Europe after fleeing violence or poverty at home.

Nearly 54,000 migrants have entered Europe this year through Spain, more than the combined migrant arrivals to Italy and Greece, which had been the most popular migrant destinations in previous years. One-fifth of them arrived in October, the month with most migrant arrivals so far this year, according to U.N. statistics.
Africa Associated Press Immigrants Spain