on November 14, 2018
Tie Igbo survival to their victory • Oblige me this last wish, Nwabueze begs Ndigbo 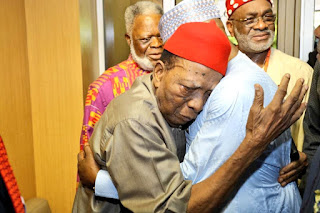 Image via Daily Sun
“The Atiku/Obi ticket is for the survival of Ndigbo. It is our determination to ensure its success by mobilising the entire Igbo to vote for them…”
BY MAGNUS EZE, RAPHAEL EDE
ENUGU (DAILY SUN}   Igbo leaders from the five South East states, under the auspices of Mkpoko Igbo, have endorsed the joint presidential ticket of Atiku Abubakar and Peter Obi for 2019 general elections.
They lamented the precarious situation the Igbo have found themselves in the country, in the face of their obvious exclusion from the centre in recent years, and, therefore, said the survival of Ndigbo in Nigeria depends on the actualisation of the Atiku/Obi presidency.
The summit, which held yesterday, at Nike Lake Resort Hotel, Enugu, with the theme: “Ndigbo 2019 and beyond,” and chaired by elder statesman, Prof. Ben Nwabueze, was attended by the cream of Igbo society, led by President General of Ohanaeze Ndigbo, Chief Nnia Nwodo.
Other prominent participants were the Obi of Onitsha, Igwe Nnaemeka Achebe, Senator Ben Obi, Prof. Ben Nwabueze, Senator Chris Anyanwu, Chief Achike Udenwa, Chief Onyema Ugochukwu, Prof. Anya O. Anya, Chief Emeka Ugwu-Oji, Amb. Frank Ogbuewu, Amb. Lawrence Nwuruku, Senator Enyinnaya Abaribe, Prof. A.B.C. Nwosu, Prof. Uche Azikwe, Amb. George Obiozor and former Ohanaeze president general, Chief Gary Igariwey.
A communiqué read by Olisa Agbakoba, SAN, stated that their vote for Atiku/Obi presidency was based on the restructuring agenda the duo have put on the table, which the four geopolitical zones of the country has already agreed on.
“The summit deliberated on the state of Ndigbo in Nigeria, today, espec ially after years of exclusion from the centre. This country has never been so divided, as it is today. We Igbo have always yearned for a level-playing field with justice, equity and fairness.
“It was acknowledged that this nomination puts Ndigbo back in the centre of governance. It is, therefore, important that Ndigbo should rally behind the Atiku/Obi ticket.”
In his address at the meeting, Prof Ben Nwabueze begged Ndigbo to ensure the victory of the People’s Democratic Party (PDP) candidate, Atiku Abubakar, in next year’s presidential election.
He said: “This is my last wish before I join my ancestors.
“We want Nigeria to be united, but we have to survive first. Our campaigns and agitations are for our survival. The Atiku/Obi ticket is for the survival of Ndigbo. It is our determination to ensure its success by mobilising the entire Igbo to vote for them; and with their success, you would have done me the greatest honour.
“At my age, there is nothing any longer that I should pursue except the good of my people in Nigeria, and this is the path to it. Please do me the honour of that ticket before I answer my final call, and I will be happy. When you leave here, go back to your villages and communities and say to them that Ndigbo must survive in Nigeria, and the only way to ensure their survival is to deliver the Atiku/Obi ticket in 2019. I assure you I will rest in peace in my grave when this is done because it would have liberated Ndigbo.”
Nwabueze, however, noted that he would not rest until a sense of belonging was achieved for Ndigbo and prayed the leaders to continue to work in unity.
Daily Sun Igbo Nigeria Politics