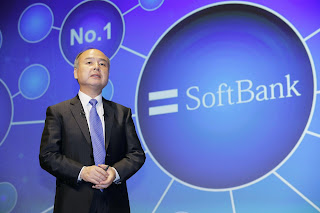 Speaking at an earnings news conference, Son called the death an attack on “a precious life but also on journalism and the freedom of speech.”

Son is partnering with Saudi Arabian Crown Prince Mohammed bin Salman and about half of his $100 billion Vision Fund, established in 2016, comes from the kingdom. The fund has been investing in various companies, solar projects and artificial intelligence.

Khashoggi, a 59-year-old columnist for The Washington Post, was killed at the Saudi Consulate in Turkey on Oct. 2, although details are still unclear.

“It is a reality a horrible act has happened. But we cannot just turn our backs on our work,” Son said. He said the investment in his fund came from the Saudi “people.”

Khashoggi vanished after entering the consulate in Istanbul to pick up paperwork he needed to get married. His Turkish fiancee was waiting for him outside. A critic of the Saudi crown prince, Khashoggi had been living in exile in the United States.

Son said he met with the prince and other Saudi officials during a recent visit and urged a thorough investigation. He said he prince had expressed concern about the killing.

The Japanese tycoon said nothing has been decided about a planned second phase for the Vision Fund, pending the results of the investigation.

“It is too early to say and we need to approach this cautiously,” he said.

Son had not commented earlier on Khashoggi’s death. He started his news conference by addressing the killing, appearing more somber than usual.

But after the first few minutes, he switched the subject to the Japan Series win by the company’s professional baseball team, the SoftBank Hawks.

“I want to express my gratitude, especially to the fans,” he said.