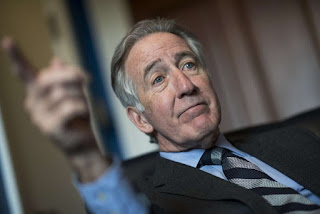 WASHINGTON (THE HILL)--Rep. Richard Neal (D-Mass.), who's expected to become chairman of the House Ways and Means Committee in January, said Wednesday that he expects the panel to request President Trump's tax returns.

"Yes, I think we will," Neal said at a press conference when asked about the possibility, according to MassLive.

Neal, who has served as the ranking member since 2016, said he hopes Trump will release his tax returns on his own.

"I think it's is a reminder that it has to be done so that legally it meets the law. I think that there are some precedents for this," he said. "But, I hope that the president would do this on his own, largely because every president since Gerald R. Ford has voluntarily done this."

Neal's comments came a day after Democrats won a majority in the House, giving them the power to launch investigations into the administration. That power also comes with the authority for the chairman of the Ways and Means Committee to request tax documents pertaining to the president.

Rep. Nancy Pelosi (D-Calif.), who's positioned to become the next Speaker, said in October that forcing Trump to release his tax returns would be "one of the first things" Democrats would do if they won a majority in the lower chamber.

Neal has previously said the Ways and Means Committee would seek the president's tax returns.

"I think we would all be comfortable if this was done on a voluntary basis," he said before the midterm elections. "If they would resist the overture then I think you could probably see a long and grinding court case."

Trump broke a longstanding precedent by refusing to release his tax returns during the 2016 presidential campaign.

On Wednesday, he pushed back on the idea of Democratic efforts to investigate him.

"If the Democrats think they are going to waste Taxpayer Money investigating us at the House level, then we will likewise be forced to consider investigating them for all of the leaks of Classified Information, and much else, at the Senate level," he tweeted. "Two can play that game!"
Capitol Hill Democracy Newsroom Society