More Women In Congress, But Was It A Pink Wave? 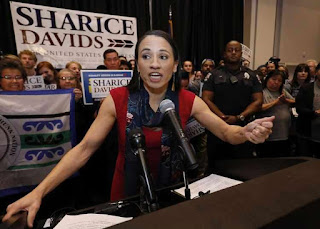 WASHINGTON (REAL CLEAR POLITICS)--The 2018 election season was billed as the Year of the Woman, but was there a "pink wave" to match the hype? With results from the midterms (mostly) tabulated, the election indeed resulted in a new high-water mark for women in the House -- an increase of 15 seats from 85 in 2016 to at least 100 in 2018 -- though some observers are hesitant to use the term "wave."

"All along, we've been pushing back on the expectation that any single election would be a ‘wave' or a ‘tsunami' for women," said Kelly Dittmar, a scholar at the Center for American Women and Politics at Rutgers University. She added, "It's taken us a long time to get even here."

In the Senate, the change will be more modest (or possibly remain flat). Claire McCaskill and Heidi Heitkamp lost; Jacky Rosen and Marsha Blackburn won, and either Martha McSally or Kyrsten Sinema will represent Arizona. If Cindy Hyde-Smith -- who was appointed to the seat of Thad Cochran this spring -- wins her Mississippi run-off election on Nov. 27, the number in the chamber will rise by one to 24.

Overall, of the women elected to both houses, 34 were new faces, which tops the record set in 1992, when 28 non-incumbent women were victorious. In the end, the Year of the Woman will result in a female representation on Capitol Hill of 23 percent, up from 20 percent.

By other measures, it also was a milestone election season. A record number of women filed to run for office, and the amount of money raised by women for women was also an all-time high. From a political standpoint, these numbers were lopsided, since most of "the firsts" were achieved by Democrats. "Democrats have a more robust recruitment process and a network of organization to support their candidates," said Dittmar.

But did voters cast their ballots for particular candidates because they are women? A June NBC/Wall Street Journal poll indicated that wouldn't be the case, as only 24 percent of respondents said they were more likely to vote for a candidate because her gender.

"What really matters are the ideas and principles candidates are running on," said Carrie Lukas, president of Independent Women's Forum, a right-of-center nonprofit organization. She added that "women's groups hype the candidacy and successes of Democratic women … to create the impression that they are the only party of women" and Lukas warned that "Republicans need to take note of the election's message and redouble efforts to show women that they offer better solutions and opportunities that will help women and families."

One of the most troubling aspects of the 2016 election for the left was that white women supported Trump by nine points (52 percent-43 percent). However, that changed in 2018, with white women divided evenly at 49 percent between Republicans and Democrats. "For Republicans to win elections in 2020, they need to do better with suburban women. Period," said Liesl Hickey, a GOP strategist.

"The president didn't have a message for suburban moms in the closing weeks," said Sarah Chamberlain, president of the Main Street Republican Partnership, which mostly has members from suburban districts. She added, "The president needed a two-pronged approach of motivating the base with immigration while talking to suburban women about school safety and opioid prevention. Safety Moms want to hear about peace and prosperity."

Lukas also makes a point about the economic message: "From a Republican perspective, it was the Year of the Woman because the Republican tax bill ushered in the lowest unemployment rate for women in two decades." Voters, however, apparently didn't see or hear that message often enough.
Associated Press Newsroom Women of Courage WOWOWOW