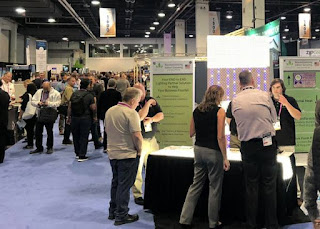 LAS VEGAS, NEVADA (LAS VEGAS SUN)--One step into the annual Marijuana Business Conference in Las Vegas and the massive growth of the industry is evident.

Small booths that used to squeeze into the Rio as recently as 2016 have tripled in size, offering CES-style presentations at the conference’s new home, the Las Vegas Convention Center.

Many of last year’s first-time show attendees are now among the record 1,100 exhibitors from 60 countries, having found their business niche in the exploding international market.

The convention, which just two years ago welcomed 10,000 industry members from across the world, is boasting more than 25,000 attendees this week. The three-day convention began Wednesday and concluded Friday.

“It’s every sector in the cannabis industry,” she said. “There’s so much innovation going on, and it’s a global industry by any measure.”

Thirty-two U.S. states now offer some form of the plant for legalized sales, including Nevada.

While the plant remains illegal under federal law, nationwide legalization of marijuana in Canada this year has opened the door for U.S.-based pot companies to gain access to capital as publicly traded organizations.

But marijuana’s fight for legitimacy is still “incomplete,” Farrington said. The conference seeks to “let people know what this industry is really about,” she said.

Joe Vargas, who has operated Las Vegas-based buylegalmeds.com since June 2015, has gone from working out of his father’s kitchen to a 4,800-square-foot hemp production facility. He also owns three brick-and-mortar stores in the valley, including a location on the Strip.

Walking through the convention with his daughter and business associate Nahtaly, Vargas said the growth of the marijuana industry has allowed him to consider franchising, going public and retiring.

Scott Leshman’s Detroit-based CBD business Cannabinoid Creations displayed a variety of CBD-infused products like fountain soda, candies and oils. He marveled at the industry’s growth since he began growing cannabis in 2006. He now operates in almost every state in the U.S.