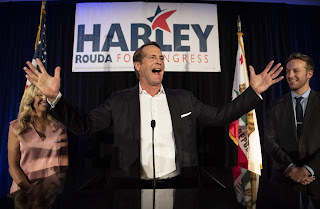 Rohrabacher, 71, was defeated by real estate executive Harley Rouda, 56, a Republican-turned-Democrat who pilloried the congressman for his skepticism over climate change and depicted him as an out-of-touch abettor in Washington gridlock.

With votes continuing to be counted, Rouda’s edge grew steadily. The vote count updated Saturday showed Rouda with 52 percent of the vote and about 8,500 more votes than Rohrabacher.

Rohrabacher’s ouster from his seat in Orange County has historical and symbolic significance. The county southeast of Los Angeles was home to President Richard Nixon and long considered a foundational block in the modern conservative movement. Reagan himself likened it to a Republican heaven.

But Democrats have picked off two GOP seats either all or partly in the county since Tuesday’s election, and are threatening in two others. Democrat Mike Levin this week captured the seat long held by retiring Rep. Darrell Issa, which cuts through the southern end of the county.

“Their lock is over,” he said.

Democrats had targeted seven GOP-held House districts in California this year that were carried by Hillary Clinton in the 2016 presidential election, including Rohrabacher’s 48th. They’ve now won three of those seats, with the potential to pick up three more and pad their new majority in the House.

For state Republicans, Rohrabacher’s defeat represents another stinging blow for a party that has seen its fortunes wither for years. Democrats hold every statewide office, both chambers of the Legislature and a 3.7 million advantage in voter registrations. With Rouda’s win, Democrats will hold at least a 42-11 edge in California U.S. House seats.

Meanwhile, Republicans have tumbled to third-party status in the state: they are even outnumbered by registered independents.

Behind the shift: A surge in immigrants in recent decades transformed the state and its voting patterns. In Orange County, largely white, conservative homeowners once delivered winning margins for GOP candidates year after year. But most of the state’s new voters, Hispanics and Asians, are Democrats or independents.

It’s also hard to discount the influence of Trump, who lost California by over 4 million votes in 2016. California is home to the so-called Trump “resistance,” which has stood in opposition to his policies on the environment and immigration.

Rohrabacher reflects the dramatic shift of fortunes in Orange County: He was re-elected by nearly 17 points just two years but met his end when Democrats backed a wealthy, pro-business moderate in Rouda.

Rohrabacher has long been an unusual figure on Capitol Hill.

The one-time Cold Warrior transformed into an outspoken supporter of improved ties with Russia, and his name has come up in the investigation into Russian meddling in the 2016 presidential election; he has denied any wrongdoing.

House Majority Leader Kevin McCarthy was heard on tape in 2016 saying Rohrabacher was being paid by Russian President Vladimir Putin. McCarthy’s office said the comments at a private meeting, disclosed by the Washington Post, were misconstrued and McCarthy was joking with colleagues.

In the campaign, Rohrabacher was faced with the prospect of making his Reagan-era conservative views appealing to newer voters, while holding college-educated Republican women who polls suggest are turned off by Trump.

The guitar-strumming, surfing congressman apparently saw the danger coming. He positioned himself as a maverick willing to buck both parties.