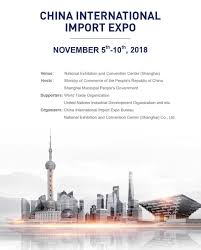 AFRICA (CHINA.ORG) ---The China International Import Expo, scheduled be held in Shanghai from November 5-10, will greatly open trade opportunities for South Africa and the African continent as a whole.

This is the view expressed by top South African business people, commercial institutions and development analysts in interviews with Xinhua.

"This global platform will force us to be competitive and shed some of our entitlement and preferential mentality," said Richards, head of the Ruben Richards Foundation and former executive secretary of South Africa's Truth and Reconciliation Commission. "This is a unique opportunity for proudly South African products to be tested in a robust market and difficult economic climate."

Janine Myburgh, President of the Cape Chamber of Commerce and Industry (CCCI), said she "would advise all exporters or potential exporters to become involved in trade shows like this, as they offer good opportunities to meet likely customers and to spot opportunities or gaps in the market."

Myburgh said she expected South African business entities to engage with China that has the world's largest population, the second largest economy and is the second largest importer and consumer in the world with great potential for the growth of consumption and import.

Given that this is the first import expo in China, Myburgh believes the South African business delegates would respond positively.

"I'm sure many businesses will find the Expo an exciting challenge. Most businesses look for export opportunities, especially when the rand is so week. It is an opportunity to build new markets and develop trade relations," she said.

She said South African delegates would also bring important offerings to the Expo, including tourism, where South Africa has a lot to offer, and places like the Western Cape Province which will also have a lot to gain.

"We now have an opportunity to 'sell' South Africa as a tourist destination and undo some of the (past) damage," Myburgh added.

In terms of expectations, she explained that South African business people will be looking for opportunities to increase trade and to tell the Chinese more about South Africa and its potential as a trading partner.

"South Africa already exports iron ore, manganese etc to China but there are opportunities to develop other mineral exports and the export of manufactured goods, especially agricultural products," she said.

She noted that there are big opportunities for agricultural products, processed food and wine.

"This is particularly important for the Western Cape which has a well-established and efficient fruit growing sector. It is also an area which creates many jobs," she said.

The CCCI president also said there is huge demand from China for nuts, especially pecan nuts, and more recently avocados.

She said new pecan nut farms along the Orange River in the Western Cape are extremely modern and productive, with drip irrigation systems and sensors to monitor the moisture in the soil.

Some of these new orchards, she said, can be monitored on cell phones and instructions can be fed by cell phone to increase or decrease the water supply.

"I would imagine that there are big opportunities for minerals and gemstones as well as products like sugar, maize, coffee and even rooibos tea," she said.

Enrico Marinus, Executive Director of MaxEnergy, who has experience in trading with Chinese entities and works extensively with business entities on the continent, noted that the Shanghai import expo "would probably be good for creating awareness of the respective country offerings."

He believes that there needs to be acute interventions that address the long term development needs in order to create stability and prosperity.