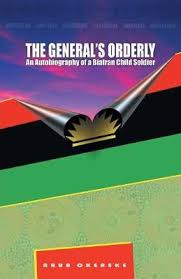 A new book, The General’s Orderly, a personal account of the Nigeria- Biafran civil war from the perspective of the author’s personal experiences as a Private and later as an Orderly to the Second in Command of the Biafran Army, has been scheduled for launch on November 30. The book, which throws fresh light on long held accounts of the Biafran war, is written by a university don, Professor Arua Okereke.

The book, which catalogues the experiences of the construction engineer and Professor of Construction Technology and Management from the time he was a child soldier, would be launched at 10am at the Imo State University Auditorium, Owerri.

The author uses the autobiography to explain what the war did to the psych of everyday men and women that participated or were victims of the war. It captures the remote and immediate causes of the war and its long term consequences on the people of Eastern Nigeria. It also gives exciting accounts of the experience: the fight, the internal intrigues, the escapes, and the eventual surrender of the Biafran army to the Nigerian Army.

The 436-page autobiography with 17 chapters covers the historic trajectory of the author from being an innocent boy fighting in a civil war he least understood, to his academic pursuits outside the country, his fantasy and childish romance with beautiful ladies in Cameroun and eventual inter racial marriage in Bulgaria.

Among special guests and royal fathers expected to grace the occasion are Lady (Mrs.) Josephine Philip Effiong, Professor (Mrs.) Uche Azikiwe, and His Royal Majesty Samuel Agunwa Ohiri. It would be reviewed by Professor Aja Akpuru Aja while Professor B.E.B Nwoke would be the presenter. The ceremony is also expected to be attended by leaders of thought from different socio-economic and political groups in the South-south and South-east, in p[articular, and Nigeria, in general.
Biafra Igbo Society The Pogrom