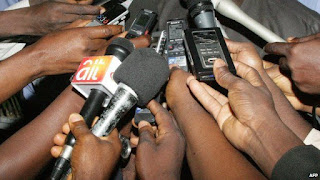 A BBC image via the Premium Times of journalists interviewing someone.

The deliberation is part of events at the ongoing West Africa Media Excellence Conference and Awards (WAMECA) in Accra, Ghana, organised by the Media Foundation for West Africa (MFWA).

The draft report on challenges, opportunities and priorities for media development in West Africa was presented by Gilbert Tietaah, a Ghanaian professor.

Mr Tietaah said the interim report was drafted after four different consultations and meetings which cut across the Anglophone and Francophone countries.

At the end of the meetings, he said, media stakeholders in these countries identified seven common challenges to include: policy and legal framework, media sustainability, professional capacity and media ownership.

Others are media in good governance, new media and implications and safety of journalists.

In the deliberations that followed, journalists, media owners and media support groups opined that the media may crash if innovative ways are not devised to fund them.

“Let’s find new ways to reach the unreachable in society. The media environment is changing, we can’t expect results by doing the same old things. We need to think differently to be sustainable,” Sulemana Braimah, the Executrive Director of MFWA said in his contribution.

The Chief Executive Officer (CEO) of Diamond Publications, Nigeria, Lanre Idowu, enjoined journalists in the region to localise their contents so as to drive impact.

“News stories must be tailored to suit communities which is in the spirit of proximity and it’s only then that we can contribute to society as media practitioners,” he said.


He charged media practitioners to have a “change of mindset, strengthen content to appeal to audience, invest in training of staff so they can imbibe new things, provide news that is usable i.e. news that is relevant to the community being reached”.

The Senegal Country Director of Open Society Initiative for West Africa (OSIWA) said the inability of media outfits to adapt to new developments in the environment constitutes itself a key challenge.

After the deliberations, the media practitioners unanimously adopted the interim paper subject to modifications.

The programme continues on Saturday with an award night.