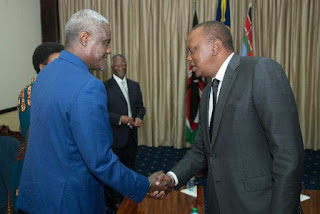 Officials aware of the events preceding Friday’s announcement of Raila as AU’s special envoy for infrastructure development in the continent said the deal was struck six months ago.

Raila will be the first holder of the new office established to promote integration, cross-border trade and regional projects, including railways and roads as well as in the energy sector. Foreign Affairs Cabinet Secretary Monica Juma said an agreement on the appointment of Raila was struck in April when the chairman of the AU Commission, Moussa Faki Mahamat, visited Uhuru. “Appointment of Raila by Mahamat and the President’s endorsement was made in pursuit of Africa’s integration agenda,” Dr Juma said. Mr Mahamat, a former prime minister of Chad, was in Kenya in April – a month after the then two major political protagonists, Uhuru and Raila, called a truce and pledged to work together after the famous handshake.

In January last year, the ex-Chadian PM beat Kenyan candidate, then Foreign Affairs Cabinet Secretary Amina Mohamed, to land his current position. This disappointed members of the Kenyan delegation that had attended the elections at the AU headquarters, led by President Kenyatta. In August that year, campaigns ahead of the General Election started before Uhuru was eventually declared the winner amid protests from Raila’s supporters.

The March 9 handshake between Uhuru and Raila caught many Kenyans by surprise, considering the bitterly contested General Election and the resultant protests that were crowned by a mock swearing-in of Raila as ‘the people’s president’ on January 31. It was not clear what was in the handshake for Raila, who had dedicated his time to discrediting Uhuru’s presidency and the entire Jubilee administration. But it now appears that AU had long before the meeting between Mahamat and Uhuru considered appointing Raila, himself a former minister for Roads, among other dockets he held. Erastus Mwencha, who retired last year from the AU Commission as deputy chairman, said high-level appointments such as Raila’s were normally agreed upon by the various Heads of State before the home country’s approval is requested. “Usually it is the AU leadership that settles on the suitable candidate before their president’s opinion is sought. This must be how it worked in this case,” Mr Mwencha, who was twice elected to his previous office, said. “The leaders would settle on the person who fits the bill before engaging the candidate to accept the offer.” Mwencha said while the position was new, a programme to push for collective development of infrastructure in Africa has been in existence. “We have always had the programme on continental development but it is the first time we have a person leading the course. Mobilisation of resources will be a key part of the position,” Mwencha said in an interview with The Standard yesterday.

Continental push In the new position, the former Prime Minister will lead the continental push for development of infrastructure through raising of funds. Focus will be projects with regional impact such as the Lamu Port-South Sudan-Ethiopia Transport Corridor. And in a statement, the executive secretary of the Intergovernmental Authority on Development, Mahboub Maalim, welcomed Raila’s appointment, noting that the role of infrastructure development was critical as it was a key driver to progress and sustained economic development. “In this regard, I acknowledges that the wise leadership, vast experience, knowledge and skills of the former Prime Minister of the Republic of Kenya will go a long way in mobilising our collective efforts towards the implementation of PIDA - the Programme for Infrastructure Development in Africa - a key pillar of the AU Agenda 2063,” Mahboub said. Juma said the ministry would give Raila all the support he will require to guarantee success.
Africa Kenya Society United Nations