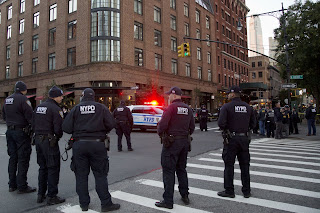 Police are standing watch near a building associated with Robert DeNiro, Thursday, Oct. 25, 2018, in New York after reports of a suspicious package. (AP Photo/Mark Lennihan

WASHINGTON (AP) — The Latest on pipe bombs sent to prominent Democrats and CNN (all times local):

Two officials told The Associated Press on Thursday that a person working at the building with a law-enforcement background called police after seeing images of a package bomb sent to CNN and recalling a similar package addressed to De Niro.

De Blasio said: “Thank God there were no injuries.”

De Blasio said the device removed from De Niro’s office “was very similar to the devices that have located within the last 48 hours” at CNN and locations connected to prominent Democrats.

He said all of them appear to be from the same sender and it’s “clearly an effort to terrorize people politically, to choose people for political purposes and attack them because of their beliefs.”

De Blasio said the device is being examined at an NYPD facility in the Bronx.

The FBI is confirming packages addressed to former Vice President Joe Biden and actor Robert De Niro are similar in appearance to those used to send bombs to prominent Democrats.

The FBI provided the update in a tweet Thursday morning.

New York City police early Thursday recovered a package addressed to De Niro with the same return address used on the other packages.

The official wasn’t authorized to discuss an ongoing investigation publicly and spoke on condition of anonymity.