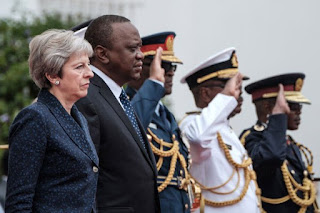 British Prime Minister Theresa May and President Uhuru Kenyatta before reviewing the guard of honour at the State House in Nairobi on August 30, 2018. PHOTO | AFP  via Daily Nation, Kenya

On air, online and in print, British media, and some on the European continent, consistently reported that Prime Minister Theresa May was visiting Africa.

She wasn't. She respectively visited South Africa, Nigeria and Kenya on a whistle-stop tour of three of Africa’s 54 countries.

That coverage obscured the fact that one, South Africa, Nigeria and Kenya were deliberately chosen by London for the PM because of their economic, political, security and geo-strategic importance; for the UK’s shifting interests and for the role they are to play in emergent or reset relations with London.

Two, the troika matter because Africa is no longer regarded as the Dark Continent but the rising land of opportunity, blessed with abundant natural resources and the world’s fastest growing population set to be a huge labour pool and market for global products in future.

Africa is the battlefield for the war for resources which features China, the rising superpower with generous state largesse; the US as the declining and niggardly superpower led by an economic nationalist; and a Europe that is battered economically by irregular immigration from Africa and politically by the toxic populism this spawns.

And, three, South Africa, Nigeria and Kenya are important because they matter as the economic, and by extension political, pillars of the South, West and East African regions of the continent. They matter because London, which is exiting the European Union, the world's largest trading block, in March, is in search of new business frontiers as it resets its diplomatic and trading models. And, Nigeria’s and South Africa's are respectively Africa’s first and second biggest economies.

The three matter because European countries want new partnerships that will create jobs and opportunities on the African continent so that young people do not migrate to Europe. South Africa, Nigeria and Kenya should be trailblazers for London's shift from aid to trade and increasing interest in British private sector investment in Africa to create jobs and opportunities for young people.

Lord Boateng, the Chairman of the Africa Enterprise Challenge Fund, which awards grants to private sector firms to support new and innovative business models in Africa, put it better than Mrs May ever has in an interview with BBC’s Radio 4: “We have a lot of catching up to do if we are to make the most of what is a historic opportunity to recast the relationship between Africa and the UK away from being seen solely as a philanthropic exercise, a basket case suitable only for (overseas aid), to an opportunity that requires investment, that requires risk taking and support by government for British companies.”


Catching up? The consulting firm Development Reimagined reports China's top leadership (the president, premier and foreign minister) has made a total of 79 visits to 43 different African countries over the past 10 years. France's Emmanuel Macron has visited nine times and touched down in 11 countries. The last Brit PM, David Cameron, had visited in 2011.

Mrs May was herself clear that London is seeking a new kind of relationship with Africans that focuses on helping British private sector firms invest in fast-growing economies “bolstering states under threat” from Islamic extremism such as Chad, Mali and Niger.

So, London delicately picked and chose Pretoria, Abuja and Nairobi for Prime Minister May just as Berlin chose the West African countries of Senegal, Ghana and Nigeria for Chancellor Angela Merkel; and President Trump welcomed Kenya’s President Kenyatta as the second African head of state to be invited to the White House.

The difference is provided by China, which is hosting almost all African heads of state or government in Beijing. In a word, there is a new scramble for Africa in which the Europeans have competition in the Chinese, Japanese, Koreans, Indians and Americans.

No picture captures this new competition for the opportunities Africa presents better than President Kenyatta being feted in Washington early in the week; hosting Mrs May in the middle of it and dashing off to Beijing at the end of it.

While Beijing would appear to want all of Africa or most of it, all of them are driven by their own interests first, but, unlike the buccaneers who carved out Africa among themselves in that infamous 1884-1885 Berlin Conference, Mrs May is clear that: “True partnerships are not about one party doing unto another, but states, governments, businesses and individuals working together in a responsible way to achieve common goals.”