Trump Wakes Up Complaining About Negative Google Search Results About Himself. 'Illegal?' 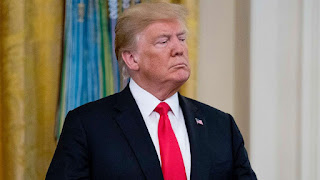 In a pair of tweets posted before 6 a.m., the president said the results included only “the viewing/reporting of Fake New Media.” He hadn’t corrected the typo within about an hour.

"Google search results for “Trump News” shows only the viewing/reporting of Fake New Media. In other words, they have it RIGGED, for me & others, so that almost all stories & news is BAD. Fake CNN is prominent. Republican/Conservative & Fair Media is shut out. Illegal?" Trump tweeted.

"96% of ... results on 'Trump News' are from National Left-Wing Media, very dangerous. Google & others are suppressing voices of Conservatives and hiding information and news that is good. They are controlling what we can & cannot see. This is a very serious situation-will be addressed!"

Google search results are affected not only by region but also by personal search history. It was unclear whether the president had Googled himself, or whether he was referring to a recent piece in PJ Media, a conservative blog, alleging that 96 percent of Google search results for news about Trump were from “left-leaning news outlets.” His accusations appeared to mirror those in the Aug. 25 piece.

“Is Google manipulating its algorithm to prioritize left-leaning news outlets in their coverage of President Trump?” asked Paula Bolyard, the “supervising editor” of the site, who describes herself on Twitter as a Christian, a constitutional conservative and a “Cultural nonconformist.”

She said she searched “Trump” on Google News and weighed the results using a media bias chart developed by Sharyl Attkisson, a former CBS News correspondent. Bolyard said left-leaning outlets accounted for 96 percent of the results, with CNN stories making up “nearly 29 percent of the total.” She said she performed the search several times using different computers, and the results did not differ considerably.

But nowhere did the editor and blogger reckon with the fact that the sheer volume of content produced by different outlets plays a major role in determining the share of results they claim. She did, however, acknowledge that her methods are “not scientific.”

Trump, for his part, gave only one specific example, saying “Fake CNN is prominent.” But he concluded, “they have it RIGGED, for me & others, so that almost all stories & news is BAD.” Conservative media, he claimed, is “shut out.”

“Illegal?” he speculated, going on to accuse Google of “controlling what we can & cannot see.” He promised the “very serious situation” would be “addressed,” but didn’t give specifics.

A search for “Trump News” shortly after the president’s posts returned three top stories. There was a Fox News report about Lanny Davis, an attorney and spokesman for Trump’s former lawyer Michael Cohen, admitting he was an anonymous source for CNN’s report about Trump’s possible prior knowledge of the summer 2016 meeting at Trump Tower attended by a Russian lawyer. There was also a CNN account of Trump’s decision to issue, several days late, a statement praising the late senator John McCain (R-Ariz.). And there was an NBC story about the surge of Muslim candidates inspired to run for office across the country by Trump’s election.

Trump has raised alarm about what he describes as political bias pervading technology and social media companies. In July, he accused Twitter of using a “discriminatory and illegal practice” to silence conservative voices. Jack Dorsey, the chief executive of the social media giant, said the company’s employees are “more left-leaning” but maintained that political ideology doesn’t affect what appears on Twitter.

Representatives of major technology companies appeared before Congress in July to answer allegations of censorship.

“We have a natural and long-term incentive to make sure our products work for users of all viewpoints,” said Juniper Downs, who works on policy for Google-owned YouTube.
Donald Trump News Desk Society Washington Post