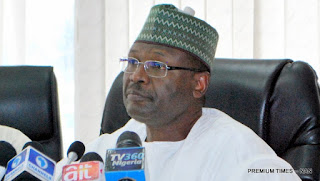 ABUJA, NIGERIA (PREMIUM TIMES)--The Independent National Electoral Commission (INEC) has said security agencies would be on the lookout for acts of vote buying during the upcoming Ekiti State governorship election slated for July 14 this year.

The commission also noted that such malpractices were prevalent at the governorship polls held in Edo, Ondo and Anambra States respectively.

INEC’s National Commissioner in charge of Ondo, Ekiti, Osun, and Oyo states, Solomon Soyebi, who was representing the Chairman, Mahmood Yakubu, at a stakeholders’ meeting on the continuous voters registration, in Ado Ekiti on Monday, said the commission was aware that money was used to influence voters during the Ondo and Anambra elections.

The electoral body said it was aware of how people were offered N5,000 each to cast their votes in those states, saying such won’t reoccur in Ekiti ”through strong synergy with the security agencies.”

“The elections in Edo, Ondo and Anambra States were largely monetised,” Mr. Soyebi said. “We are aware of this . It was ‘see and buy,’ but it won’t happen in Ekiti.”

He said INEC had conducted a total of 286 polls since 2015 and that only 28 were nullified due largely to parties’ poor internal democracy.

“It was N5,000 per vote in Ondo and Anambra states. We are working with security agencies not to allow it to happen again. We even seized some cash in Anambra state,” he said.

“In Ekiti election, we won’t allow any vehicle to come near the polling units, because the politicians used to keep the money in the booth. With this, it will reduce because politicians can’t carry large amount in their pockets.”

Mr Soyebi also assured that the commission would be neutral in Ekiti election, urging all to work hard to mobilise the people for the continuous registration exercise and to claim over 200,000 Permanent Voter Cards that were still with the commission.

The Commissioner of Police in the state, Abdullahi Chafe, said the police had mapped out strategies to stop electoral malfeasance.

Also the state Resident Electoral Commissioner, Abdulganiy Raji, said over 218,000 PVCs were yet to be claimed.

The deputy governor of Ekiti State, Kolapo Olusola, said the people in Ekiti were peace-loving. “All we want from INEC is neutrality, so that Ekiti can be at peace before, during and after this election.”

The traditional rulers in Ekiti State who attended the meeting, charged INEC to avoid the manipulation of the coming governorship election.

The Alare of Are Ekiti, Boluwade Adeniyi, in his comments, said, “INEC boss, we are aware of smart card reader that will be used for this election. Our appeal is that, do not outsmart the smart card reader, so that we can have a peaceful poll.”

The Attah of Ayede, Mumini Orisagbemi, also had a warning.