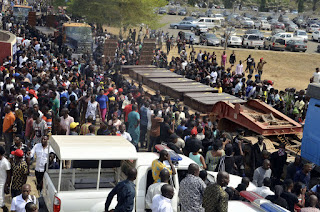 AP File Photo: People watch a truck conveying coffins with victims of an attack alleged to be by Fulani herdsmen before a mass funeral in Makurdi, Nigeria. Nigeria's military has killed at least b35 people in air raids during attempts to combat growing violence between farmers and herdsmen. Amnesty International said Tuesday January 30, 2018 that thousands of people have been displaced and at least 168 killed since the beginning of the year as farmers and nomadic herdsmen fight over land in five states.

Thousands of people have been displaced and at least 168 killed since the beginning of the year as farmers and nomadic herdsmen fight over land in five states, the human rights group said. Nigeria's military response has not curbed the fighting and further threatens the communities it is trying to protect, the new report said.

"Launching air raids is not a legitimate law enforcement method by anyone's standard. Such reckless use of deadly force is unlawful, outrageous and lays bare the Nigerian military's shocking disregard for the lives of those it supposedly exists to protect," said Amnesty International's Nigeria Director Osai Ojigho. "The government must overturn its response to these deadly clashes to avoid this crisis getting out of control."

Adesanya on Tuesday denied the allegations.

"The NAF remains a highly professional organization, which places high value on respect for human rights, and therefore categorically states that the allegations by Amnesty International are lies," he said. "NAF's aircraft was not used to kill anyone in the villages around Numan."

Residents in those villages spoke of destruction of homes caused by the air raids as they fled the violence, unable to fight back.


Amnesty blamed unlawful killings and excessive use of force by the military on soldiers being deployed too frequently.

French-made SNEB rockets, known to be used by Nigeria's Alpha Jet aircraft, were identified in some villages, the rights group said.

Amnesty called for a better response to the communal violence that killed at least 549 people in 2017.