Tunisia Tries To Defuse Tension With UAE Amid Airline Spat 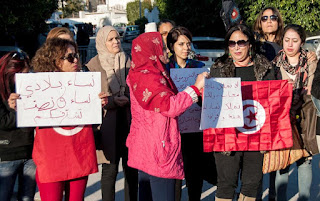 Tunisian women stage a protest near the United Arab Emirates' embassy in Tunis, Tunisia, Monday Dec. 25, 2017. Tunisia has suspended all flights by Emirates to and from Tunis after the Dubai-based airline barred Tunisian women from boarding its flights last week.

TUNIS, TUNISIA (AP) — Tunisia tried to smooth out emerging tensions with the United Arab Emirates on Monday after Emirates airline barred Tunisian women from boarding its flights and the North African country responded by suspending the Dubai-based carrier's operations in the air and on the ground.

The spokeswoman for the Tunisian presidency dismissed any notion of a "diplomatic crisis" between the two countries, expressing Tunisia's "understanding" of a decision made by the UAE's government to "protect its territory and its airlines."

After the Emirates' decision caused an outcry in Tunisia, the presidential spokeswoman had to speak publicly on a radio station to explain that the ban targeting Tunisian women followed alleged serious threats of attacks.

The spokeswoman, Saïda Garrach, said the UAE's authorities explained that they made the decision following "serious security information" about alleged plans for attacks by Tunisian women, or women with Tunisian passports, from "tense hotbeds" in Syria and Iraq.

UAE Minister of State for Foreign Affairs Anwar Gargash tweeted that the ban was temporary and due to security reasons. In a later written statement, Tunisian President Beji Caid Essebsi "called for overcoming these problems as soon as possible to preserve the relations of brotherhood and cooperation between the two peoples of Tunisia and UAE."

But Caid Essebsi said Tunisia will maintain the suspension of all flights by Emirates to and from Tunis until the UAE's government reconsiders its ban. He stressed the need to preserve the dignity of all Tunisian citizens in the country and abroad and to protect the rights of Tunisian women in all circumstances.

Tunisia summoned UAE's ambassador on Friday following Emirates' ban. Speaking on Shems FM radio, Garrach, the Tunisian presidential spokeswoman, said the UAE decided on the targeted ban "swiftly, without notifying the Tunisian authorities and even their own ambassador in Tunis," given the "seriousness" of the information they held. While "understanding" the Emirati move, she said the way the UAE proceeded was "unacceptable" and required a "quick reaction" from Tunis.

A small protest was held outside the UAE Embassy in Tunis in the afternoon. Protesters called the decision "discriminatory" and "a humiliation to Tunisian women." Since Friday, several Tunisian women have been barred from boarding Emirates flights in Tunis, Abu Dhabi and Beirut.
Africa Arabs Society The Associated Press Tunisia
Reactions: