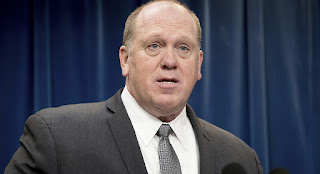 
WASHINGTON (THE HILL) -- The country's top immigration cop said Friday his agents "will have no choice" but to conduct workplace and neighborhood immigration raids in light of California's new sanctuary law.

Under California's new law, state and local police will have major restrictions in how and when they can collaborate with federal agents on immigration investigations and arrests.

One notable provision in the law is it prohibits so-called immigration holds, requests from ICE to local authorities to hold a prisoner or detainee longer than the constitutionally mandated period.

Opponents say a hold, also known as a detainer, constitutes a violation of a detainee's constitutional rights, and their enforcement puts local authorities at risk of liability.

Supporters, chief among them Homan and Attorney General Jeff Sessions, say detainers are necessary so arrests of dangerous immigrants can be made in the confines of jails and prisons.

"ICE will have no choice but to conduct at-large arrests in local neighborhoods and at work sites, which will inevitably result in additional collateral arrests, instead of focusing on arrests at jails and prisons where transfers are safer for ICE officers and the community," Homan warned.

Still, California's new law allows for ICE agents to interview and arrest detainees in local facilities, as long as they have a judicial warrant, in keeping with due process protections in the constitution.

Homan and others in the Trump administration have long argued that judicial warrants are unviable in immigration enforcement and that detainers are "legally defensible."

Homan also warned that under SB54, ICE would "likely have to detain individuals arrested in California in detention facilities outside of the state, far from any family they may have in California."

"Ultimately, SB54 helps shield removable aliens from immigration enforcement and creates another magnet for more illegal immigration, all at the expense of the safety and security of the very people it purports to protect," Homan said.

But pro-immigrant activists said the law was necessary to protect against what they view as excessive enforcement measures.

"The California Values Act is a stinging rebuke to the nativism of President Trump and his drive to deport millions," said Frank Sharry, executive director of America's Voice Education Fund.

"Trump and Sessions are determined to bully state and local jurisdictions into turning immigrants over to ICE even though it diverts law enforcement from protecting the public. With this and other steps, California is declaring that it wants no part in aiding and abetting Trump’s deportation force," he added.
Capitol Hill Donald Trump Immigrants Immigration News Desk Society United States
Reactions: