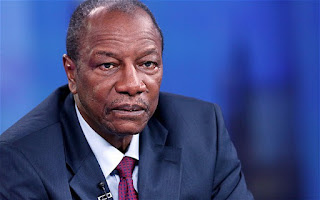 Israel said Wednesday it has renewed diplomatic ties with the largely Muslim African country of Guinea, the latest step in Israel's courtship of the continent, and Prime Minister Benjamin Netanyahu said he expected another nation to soon follow suit.

The news comes after Netanyahu's four-nation Africa tour this month. It was the first visit to sub-Saharan Africa by a sitting Israeli prime minister in nearly three decades.

"This is part of a process that is gaining momentum, and it is very important. It is opening Israel up to Africa," Netanyahu said in a statement.

Israel is pursuing closer security and other ties with Africa, and it wants African states to support it at the United Nations. where the Palestinians were recognized as a non-member observer state in 2012.

The new agreement says Guinea was the first country to cut ties with Israel after the 1967 Mideast war, when Israel captured the West Bank. east Jerusalem and Gaza Strip from its Arab foes.

It also says Guinea and Israel have had friendly relations even in the absence of diplomatic ties. Israel took part in the international effort to halt the recent Ebola virus outbreak, which hit the West African country hard.

Israel said the number of African countries with which it doesn't have diplomatic ties is shrinking, and it hopes others will follow Guinea's example.

Israel's foreign ministry lists several Muslim or largely Muslim countries that have no current ties with it. Many are in northern and West Africa.