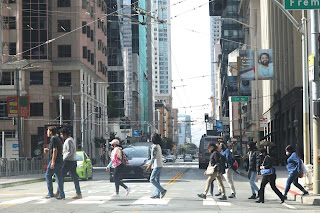 As of January 1, jaywalking will be decriminalized in California thanks to a new law signed by Governor Gavin Newsom.

For nearly a century, the Golden State has had one of the strictest jaywalking laws in the nation, with many pedestrians being placed under arrest and fined for the infraction, sometimes worth up to $200.

Now, Assembly Bill 2147, or the "Freedom to Walk" act, is designed to give pedestrians more flexibility while exhibiting careful judgment when crossing streets, as long as there's no immediate danger and the pedestrian isn't creating a hazard.

The bill will prohibit officers from "stopping a pedestrian for specified traffic infractions unless a reasonably careful person would realize there is an immediate danger of collision with a moving vehicle or other device moving exclusively by human power."

Lawmakers believe that the prior jurisdiction unfairly targeted minorities, and are glad that a step is being taken in the right direction. Jaywalking will still be illegal, but the decriminalization of the act helps people prevent unnecessary fines and interactions with law enforcement.

"We're glad there's a greater recognition of the importance of being able to walk without being harassed, especially if you're an Angeleno of color," said John Yi, the Executive Director of Los Angeles Walks. "We know just by data alone, tells us how jaywalking laws have over-penalized us in communities of color."

Once the law is in effect Jan. 1, officials have five years to evaluate the outcomes of relaxing jaywalking laws. Evaluations will be made of pedestrian-related incidents to see if the amended law has curbed or increased such accidents, and how it has affected walker safety.

"Time will tell if this law actually reduces ticketing and whether it does decriminalize certain communities who have been over-impacted," said Yi.

Even with decriminalization on the way, the act is raising some concerns over what will be considered a "safe" jaywalking, which will ultimately be up to police to decide, especially if a pedestrian gets hit while crossing.

"I think there will be a bit of gray area, but a lot of these cases, in terms of negligence and people being struck whether it's in a vehicle or as a pedestrian, really do go to the case-by-case basis or the facts of the case in which they're struck," said Oscar Gutierrez, an attorney specializing in personal injury. He expects to see the amount of cases increase shortly after the law takes effect.

He believes that law enforcement will take a number of factors into account, like if they're intoxicated or distracted at the time of the incident, to determine whether or not they're found liable.
California Gavin Newsom Los Angeles News Desk