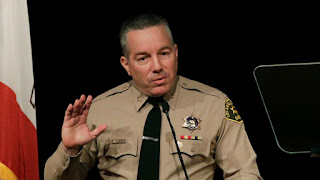 LOS ANGELES (POLITICO) -- THE BUZZ: The sun was scarcely up in Los Angeles yesterday when sheriff’s deputies conducted a search that would rivet the county’s political class.

Los Angeles Supervisor Sheila Kuehl found deputies at her door who work for political antagonist Sheriff Alex Villanueva. As reporters watched, deputies executed one of several search warrants seeking more information on contracts the Metropolitan Transportation Association had awarded to an anti-sexual-violence nonprofit run by Kuehl’s longtime friend Patricia Giggans, whose home was authorized to be searched along with the offices of Peace Over Violence and MTA headquarters. The warrant describes evidence for a quid pro quo scheme in which Metro awarded contracts to Peace Over Violence and Giggans and other officials donated to Kuehl. It suggests bribery, fraud and theft of public funds may have occurred.

But Kuehl and other Angeleno observers suspected something else: payback. A protracted power struggle between Villanueva and the board of supervisors has convulsed county government for years. Villanueva has resisted the county’s efforts to investigate deputy gangs in his department, including by refusing to appear before a civilian oversight panel to which Kuehl appointed Giggans. Kuehl has called for Villanueva’s resignation and helped put a measure on the November ballot that would let supervisors fire wayward sheriffs — a move that Villanueva has assailed as an illegal effort to undermine his authority and override voters.

Investigations by Villanueva’s office have drawn intense scrutiny thanks to that political context. An LA Times report last year on allegations that Villanueva was targeting political enemies cited the probe encompassing Kuehl and Giggans’ nonprofit. Los Angeles District Attorney George Gascón told the Times he refused to collaborate with an investigative unit that was “only targeting political enemies” of Villanueva, with whom Gascón has regularly sparred. One of the unit’s investigators has ties to the judge who signed the warrant authorizing Wednesday’s search. Kuehl called the judge “a friend of the sheriff.”

Villanueva’s office declined to comment on Wednesday’s raid, citing an “ongoing public corruption investigation.” The FBI said they were not involved in the operation and Attorney General Rob Bonta said only that his office was monitoring the investigation. The Los Angeles DA’s office said it had reviewed the sheriff’s case in 2021 and concluded it did not establish “criminal conduct beyond a reasonable doubt” — and that, since they were not consulted on the warrant, they wouldn’t defend it in court.

But Kuehl had no qualms about offering her take as she stood outside her home, insisting she had not committed a felony and lambasting a “bogus non-investigation” that she called “harassment” and linked to the sheriff. “Of course he knows about it,” she told Fox LA. “If he doesn’t know about it there’s a rogue element in the sheriff’s department, and either way it’s totally out of control.” Villanueva, she said, “should have stopped it.” (For his part, Villanueva wrote Bonta to ask that the California DOJ investigate whether Kuehl was “illegally alerted” of the impending search).

Kuehl has not been charged with a crime, and there is no evidence establishing Villanueva ordered a politically motivated probe. But given how the clash between their respective offices has shaped Los Angeles politics in recent years, Angelenos were transfixed by yesterday’s search and keen to know what comes next. One thing we know for sure: Villanueva is up for re-election in about six weeks, and he’s sharing the ballot with an initiative that would let supervisors jettison sheriffs who cross the line.