US Will Not Dictate Africa's Choices, Blinken Says 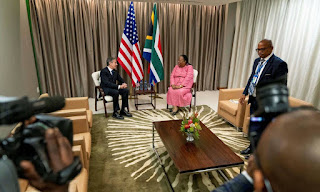 U.S. Secretary of State Antony Blinken meets with South Africa's Foreign Minister Naledi Pandor at the South African Department of International Relations and Cooperation in Pretoria, South Africa, August 8, 2022. Photo by Reuters/Andrew Harnik
PRETORIA, SOUTH AFRICA (REUTERS) -- The United States will not dictate Africa's choices, U.S. Secretary of State Antony Blinken said on Monday, despite having sought support from the continent's 54 countries in efforts to isolate Russia over its attacks in Ukraine .

Blinken was presenting a new strategy document for sub-Saharan Africa at the University of Pretoria in South Africa's capital, part of a continental tour that will also take him to the Democratic Republic of Congo and Rwanda.

His visit coincides with heightened geopolitical rivalry between the world's superpowers since Russia attacked Ukraine in February. South Africa was one of 17 African countries to abstain from the United Nations vote condemning Russia's assault.

It also comes two weeks after Russian Foreign Minister Sergei Lavrov made a four-nation Africa tour where he berated the West for meddling in Africa's affairs.

French President Emmanuel Macron used a tour of Africa around the same time to accuse Russia of deliberately causing a global food crisis.

"Too often, African nations have been treated as instruments of other nations' progress, rather than the authors of their own," said Blinken. "They have been told to pick a side in great power contests that feel far removed from daily struggles of their people."

The strategy document stressed the threats posed by China and Russia to the United States' interest in this increasingly important region.

Africans frequently resent being a theatre for competition between China, Russia and the Western order. The Ukraine crisis has exacerbated their longstanding rivalry over Africa's natural resources, trade and security ties.

"The United States will not dictate Africa's choices, and neither should anyone else," Blinken said.

Blinken took a swipe at Russian private military contractor Wagner, which has extended Russian influence over security affairs in some African countries such as Mali and Central African Republic. The strategy document accused Wagner of "fomenting instability" for strategic benefit.

"The United States recognizes African countries ... are afflicted by the scourges of terrorism and insecurity," he said. "But the answer to these problems is not Wagner, or any other mercenary group. The answer is working to build more effective, accountable African security forces."

The strategy paper also said China recognizes the importance of Africa in advancing its commercial interests and seeks to weaken U.S. ties with the continent. The U.S. should counter this by supporting infrastructure, Internet and climate change mitigation projects, it said.

Chris Ogunmodede, associate editor at World Politics Review, said that Blinken's visit was transparently aimed to trying to get the continent to take the West's side against Russia.

"If it's about competing with China (and Russia) in those terms, it's going to fail. It's not about what Africans want. It's all about what Washington wants. That's not a partnership."
Africa News Desk Reuters South Africa United States