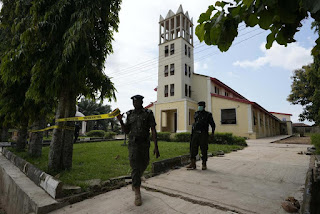 Nigerian police officers tape around the St. Francis Catholic church in Owo Nigeria, Monday, June 6, 2022 a day after an attack that targeted worshipers. The gunmen who killed 50 people at a Catholic church in southwestern Nigeria opened fire on worshippers both inside and outside the building in a coordinated attack before escaping the scene, authorities and witnesses said Monday. (AP Photo/Sunday Alamba)
Nigeria, Africa’s most populous nation, faces a myriad of security threats — from Islamic State-linked militants in the north to separatist movements in the south.

Much of the violence is related to religious extremism, but some attacks are fueled by conflicts over natural resources. What all have in common, though, is that civilians are most often the victims.

Armed groups are able to carry out prolonged assaults in remote locations where help is often delayed by an inadequate security presence. In many cases, accurate death tolls are never compiled.

A look at some of the attacks targeting Nigerian civilians in the past five years:

JANUARY 2022 — Dozens of civilians are killed in three days of bloodshed by armed groups in northwest Zamfara state.

SEPTEMBER 2021 — An attack in a village in northern Kaduna state leaves at least 37 dead. Locals say the violence stemmed from an ongoing conflict between herders and farmers over land and water issues.

JUNE 2019 — A suicide bomber kills at least 30 people gathered to watch a soccer match on television in northeastern Borno state.

APRIL 2019 — Suspected Boko Haram extremists attack a village in northeastern Borno state, killing at least 25 people who had returned home from a wedding.

FEBRUARY 2019 — Suspected Boko Haram militants kill at least 60 people in a town near the Cameroonian border in northeastern Borno state.

JUNE 2018 — More than 200 people die in clashes between farmers and herders in central Plateau state.

MAY 2018 — At least 24 people are killed in an attack on a mosque in northern Adamawa state.

APRIL 2018 — Gunmen kill 15 people in an attack on a Catholic church, including two priests in central Benue state.

JANUARY 2018 — Gunmen fatally shoot at least 17 worshippers at a church service for the new year in Rivers state.

NOVEMBER 2017 — At least 50 people are killed in a suicide bombing at a mosque during morning prayers in northeastern Adamawa state.