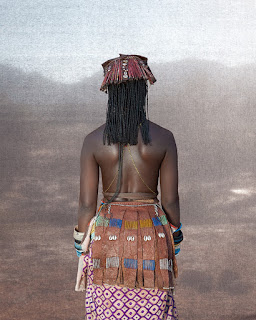 
Captured over three years “Confluence – Tradition & Modernity and the Last Tribes of the Kunene River” is the title of a stunning exhibition of photographic portraits by internationally acclaimed photographer, Christopher Rimmer. The series features majestic portraits of the last remaining African tribes who live along the Kunene River in Namibia and Angola.

British photographer, Christopher Rimmer’s latest body of work, “Confluence – Tradition & Modernity and the Last Tribes of the Kunene River,” recently debuted to critical acclaim at Art Expo in New York and will be exhibited worldwide throughout 2019.

Rimmer, who is best known for his large-scale portraits of subjects who exist on the fringes of mainstream society, has frequently used Sub-Saharan Africa as a backdrop for his work. The talented photographer considered it critical to record the last remaining tribes of this region before their ancient way of life is erased by the unstoppable juggernaut of commercialization and progress.

“The Kunene region is rich is untapped mineral wealth,” Rimmer explains, “and the river itself offers the potential to be dammed for a hydro electrical scheme that will generate power for large scale mining projects. This in turn has attracted a massive in-flow of investment capital, particularly from China, that has the potential to transform this ancient landscape and also forever alter the traditional ways of life of the tribes who live there.”

“I considered it important that these unique and majestic people be captured at this particular point in time before modernity changes their ancient way of life completely. I doubt the way of life I have captured in Confluence will be present in any meaningful way within twenty years and I find this rather sad because a unique and beautiful way of life will be lost forever.”

The exhibition comprises twenty large-scale portraits of the Ovahimba, Ovakahona, Ovazimba, Mwila, Herero and Macubal people, each who have their own unique customs, language, dress and spiritual traditions and live along this ancient and beautiful river which forms the natural border between Angola in the north and Namibia in the south.

As a backdrop, Rimmer has employed what is known in the film industry as a ‘scrim’ to considerable effect. A ‘scrim’ is basically a translucent piece of fabric stretched around a frame and placed behind the subject that darkens and distorts the space behind the subject. He explains, “I used this as a device as a means to encourage the viewer to focus on the form and expression of the subject, whilst still retaining an awareness of the landscape in which the subjects live and in which they were photographed. In some of the photographs from the series, you can actually see the Kunene River in the background.”

The stunning and thought provoking images which make up “Confluence – Tradition and Modernity and the Last Tribes of the Kunene River” may be viewed on Christopher Rimmer’s website at: https://christopherrimmer.com/confluence-exhibition/
Africa Images News Desk Press Release
Reactions: