#IStandWithIlhan Trends After Crowd At Trump Rally Chants 'Send Her Back' 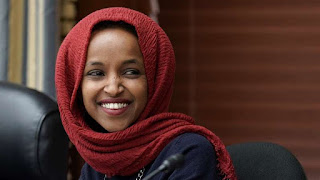 GREENVILLE, N.C. (THE HILL) -- The hashtag "#IStandWithIlhan" began trending after the crowd at President Trump's rally Wednesday night targeted Rep. Ilhan Omar (D-Minn.) and broke out into chants of "send her back."


The chant erupted during the Greenville, N.C., rally after Trump made a series of remarks blasting Omar following days of attacks on her and other non-white progressive congresswomen, including Reps. Alexandria Ocasio-Cortez (N.Y.), Ayanna Pressley (Mass.) and Rashida Tlaib (Mich.).

All of the freshman lawmakers are U.S. citizens but Omar is the only one of the four born outside of the U.S., having arrived as a child refugee from her native Somalia.

Omar responded to the chant by sharing a quote from Maya Angelou's poem "Still I Rise."

Social media users, including many U.S. and foreign politicians, used the hashtag "#IStandWithIlhan" as a message of solidarity following the chant.

More than 153,000 tweets had been sent with the phrase as of Thursday morning.

Sen. Bernie Sanders (I-Vt.), a 2020 presidential contender, said that he is proud of Omar's work in Congress.

"Trump is stoking the most despicable and disturbing currents in our society," Sanders wrote. "And that very hatred and racism fuels him. We must fight together to defeat the most dangerous president in the history of our country."

Former Republican Rep. Joe Walsh (lll.) said that it saddened him to see the "standard-bearer" for his party embrace the chant.

"It's so ugly. It's so un-American. It just saddens me beyond belief," Walsh wrote.

Thousands of others offered their own messages of support for the freshman congresswoman.

While some spoke out against the Trump rally chant, supporters of the president also took to Twitter with a dueling hashtag of "#IStandWithPresTrump."

With 49,000 tweets as of Thursday, some of his supporters stood by his decision to attack Omar.

Bernie Sanders ✔@SenSanders
#IStandWithIlhan and am proud to work with her in Congress.

Trump is stoking the most despicable and disturbing currents in our society. And that very hatred and racism fuels him. We must fight together to defeat the most dangerous president in the history of our country.
67.1K
8:20 PM - Jul 17, 2019
Twitter Ads info and privacy

17.2K people are talking about this

Joe Walsh ✔@WalshFreedom
It saddens me beyond belief that the standard-bearer for the Republican Party, my Party, is making “Send her back” his re-election rallying cry.

It’s so ugly. It’s so un-American. It just saddens me beyond belief. https://www.mediaite.com/tv/trump-rally-crowd-chants-send-her-back-as-potus-tears-into-ilhan-omar/ …

Guy Verhofstadt ✔@guyverhofstadt
This is monstrous. It deserves condemnation by the free world. #IStandWithIlhan https://twitter.com/guardian/status/1151750071353892865 …
The Guardian ✔@guardian
Trump rally crowd chants "Send her back!" after president attacks Ilhan Omar. It follows Trump’s racist tweets targeting Omar and three other congresswomen of colour.

Piper Perabo ✔@PiperPerabo
#IStandWithIlhan She is a friend.
We have talked about Minnesota voters, who she cares about. She cares about students. She supports women. She supports other civically engaged women (that’s how we met!) She is a good mother, citizen, friend and an important member of Congress.

Is an American citizen
Is a duly elected Congresswoman
Loves America
Is a beautiful Black woman from Somalia
Is highly intelligent, charismatic, articulate, and passionate
Speaks truth to power
Isn’t being sent anywhere#IStandWithIlhan

✔@cmclymer
This is white supremacy, and we cannot condone it. If you're an elected official or member of media, you can't sit on the sidelines as a neutral party as this continues to happen. Your silence is complicity in vile racism. #IStandWithIlhan
9,820
7:22 PM - Jul 17, 2019
Twitter Ads info and privacy

2,819 people are talking about this

Mark Dice ✔@MarkDice
#IStandWithPresTrump If you hate our country, customs, history and Constitution, you can leave... whether you're from Sweden or Somalia. It has nothing to do with race whatsoever.
13.9K
11:02 PM - Jul 17, 2019
Twitter Ads info and privacy