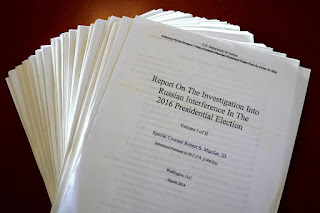 The Mueller Report on the Investigation into Russian Interference in the 2016 Presidential Election is pictured in New York, New York, U.S., April 18, 2019. REUTERS/Carlo Allegri/File Photo

WASHINGTON (REUTERS) - Democrats in the U.S. House of Representatives will read aloud on Thursday the redacted version of Special Counsel Robert Mueller’s 448-page assessment of Russian interference in the 2016 presidential election.

Representative Mary Gay Scanlon, one of the top Democrats on the House Judiciary Committee, will, along with nearly two dozen of her colleagues, begin reading the Mueller report at 12 p.m. (1700 GMT) in a Capitol hearing room.

“We have a Constitutional duty to share that truth with the American people,” Scanlon said in a release, adding the report’s conclusions could not be adequately “summarized in a tweet.”

Mueller’s report, which contained redactions, described numerous links between President Donald Trump’s 2016 campaign and various Russians but did not find sufficient evidence to establish here was a criminal conspiracy with Moscow.

The report also described numerous attempts by Trump to impede Mueller’s probe, but stopped short of declaring that the president committed a crime.

Democrats, who control the House, are sparring with the White House over numerous probes into Trump and his campaign’s ties to Russia, the president’s business dealings and administration policies.

Democrats have requested a full, unredacted version of Muller’s report, six years of Trump’s individual and business tax returns and background on decisions made by the administration on security clearances and the separation of migrant families along the U.S.-Mexico border.

The deadline for the administration to respond to a subpoena for the unredacted report passed without being met. Trump has sued to block a congressional subpoena for financial records from his accounting firm. The White House has directed key staff not to cooperate with various House probes.