World shares decline ahead of US inflation report 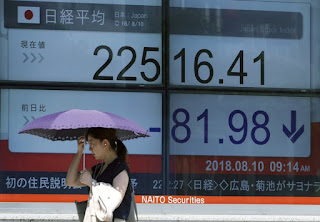 A woman walks past an electronic stock board showing Japan’s Nikkei 225 index at a securities firm in Tokyo Friday, Aug. 10, 2018. Shares were lower in Asia on Friday, tracking losses on Wall Street, despite the release of data showing Japan’s economy resumed its longtime expansion in the last quarter. (AP Photo/Eugene Hoshiko)


BANGKOK (AP) — World shares fell Friday ahead of the release of U.S. consumer price data, with European benchmarks sliding in early trading on concerns over Turkey.

TURKEY: Turkey’s government was due to outline a new economic model on Friday as worries over debt deepened. President Recep Tayyip Erdogan has sought to keep interest rates low to support economic growth, while independent economists say the central bank should be free to raise rates to rein in inflation. The lira has gyrated over the past year and was trading at 5.98 lira to the dollar early Friday. It dropped to 5.47 on Thursday.

ANALYST’S VIEWPOINT: “Officials are reportedly preparing stimulus measures in a bid to prop up growth, but these would simply exacerbate Turkey’s economic vulnerabilities and could ultimately tip the country into a full-blown crisis,” Capital Economics said in a commentary.

JAPAN GDP: The world’s third-largest economy expanded at a 1.9 percent annual pace in April-June, rebounding from a 0.6 percent contraction in the previous quarter, the government reported. Quarterly growth was 0.5 percent, driven mainly by better-than-expected domestic demand. Trade exerted a slight drag on growth. “We see rising challenges for the economy due to waning consumer confidence and an uncertain global trade environment, which will weigh on growth in exports and investment,” Fitch said in an analysis.

AP Markets Writer Marley Jay contributed. He can be reached at http://twitter.com/MarleyJayAP His work can be found at https://apnews.com/search/marley%20jay
AP News News Desk Society World View