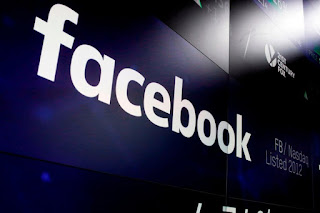 FILE - In this March 29, 2018, file photo, the logo for Facebook appears on screens at the Nasdaq MarketSite in New York’s Times Square. Facebook’s user base and revenue grew more slowly than expected in the second quarter of 2018 as the company grappled with privacy issues, sending its stock tumbling after hours. (AP Photo/Richard Drew, File)

NEW YORK (AP) — The Latest on the aftermath of Facebook’s release of user growth and expectations for the company ahead (all times local):

The 19 percent loss in Facebook’s stock chopped $119 billion off its market value.

It was the company’s worst trading day since going public in 2012, and among the biggest one-day losses of market value in U.S. stock market history.

The loss came a day after Facebook revealed that its user base and revenue grew more slowly than expected in the second quarter as it grappled with privacy issues.

Those revelations stunned investors, who believed the company had weathered the recent scandal over users’ privacy and pushed the stock to an all-time high Wednesday of $217.50.

The erosion in the value of Facebook as it is perceived on Wall Street involves some staggering numbers.

In midday trading Thursday, the company’s market value (the number of outstanding shares multiplied by the value of a single stock), fell by more than $122 billion.

That means that in one day, just the decline in Facebook’s market value is roughly the entire market value of McDonald’s or Nike, give or take a few billion. And it far exceeds to total market value of major U.S. multinational corporations such as General Electric, Eli Lilly or Caterpillar.

The company still has a total market value close to $511 billion, which exceeds the annual gross domestic product of countries like Poland, Belgium and Iran.

Facebook was downgraded by a number of industry analysts who were caught off guard by slowing growth in the wake of the Cambridge Analytica scandal.

Facebook may be heading for its worst day on the markets in its history a day after the company revealed that user growth, amid swirling questions about how their information is used, has slowed.

The social media company’s financial results, released late Wednesday, fell short of Wall Street expectations as the company continues to grapple with privacy issues. It also warned that revenue would decelerate as it promotes new products

Facebook had 2.23 billion monthly users as of June 30, up 11 percent from a year earlier, but well short of what industry analysts had been expecting.

The results are from the first full quarter following the revelation of the Cambridge Analytica privacy scandal. The company is also contending with European privacy rules that went into effect in May.
Facebook News Desk Social Networking Society The Associated Press