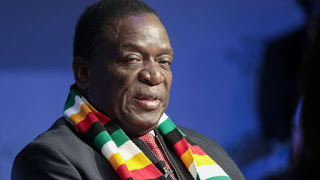 
BULAWAYO (BLOOMBERG) -- Zimbabwean President Emmerson Mnangagwa escaped unscathed after an explosion at an election rally injured both his deputies, with the blast coming within hours of a separate grenade attack on Ethiopia’s prime minister.

“’It exploded a few inches from me, but it is not my time,” Mnangagwa said in comments broadcast by state-owned media. Footage from the stadium at Bulawayo on Saturday showed the president and other VIPs walking off the stage seconds before the blast went off near the foot of the stairs. “It’s just an element of defeatists. The country is peaceful.”

Ethiopian Prime Minister Abiy Ahmed also survived an attempt on his life earlier on Saturday, minutes after addressing tens of thousands of supporters at a rally in Addis Ababa. One person died and 153 people were injured, 10 critically, after someone tried to throw a hand grenade at Abiy, before being blocked by another person in the crowd, Associated Press reported, citing witness and the health minister.

The “well-orchestrated attack” won’t hinder the nation’s unity efforts, Abiy said in comments broadcast on state-owned TV. While there’s nothing to suggest the attack is at all related to events in Bulawayo, almost 3,000 miles (4,800 kilometers) to the southwest of the Ethiopian capital, it comes as the 42-year-old leader pushes to put into action a peace agreement with neighboring Eritrea and a series of reforms to open up the economy.

“To those who tried to divide us, I want to tell you that you have not succeeded,” Abiy said.
Zimbabwe’s Challenges

Mnangagwa, 75, is facing very different challenges as Zimbabwe goes to the polls on July 30 for the first time since independence without Robert Mugabe at the helm. Mugabe was forced to step down after almost 40 years in power. The incumbent president has pledgedto rebuild an economy shattered by a failed land reform program started in 2000 that caused hyperinflation and led to mass emigration.

At least 15 casualties were reported at the blast at White City Stadium in Zimbabwe’s second-biggest city, three of them serious, including some people who lost limbs, the health minister told the Harare-based Zimbabwe Broadcast Corp.

Both vice presidents, Kembo Mohadi and Constantino Chiwenga, as well as Minister of Water, Environment and Climate Oppah Muchinguri-Kashiri, were taken to hospital, ZBC reported.

The area around the stage was cordoned off and evidence collected, the state-owned Herald said on its website, describing the blast as an attempt on the president’s life. Mnangagwa has had multiple assassination attempts, his spokesman George Charamba was cited by the Harare-based newspaper as saying.

“Violence has no place in our politics,” opposition Movement for Democratic Change leader Nelson Chamisa said. “Our prayers go to the injured.”

To contact the editors responsible for this story: Stefania Bianchi at sbianchi10@bloomberg.net, Vernon Wessels, Ros Krasny