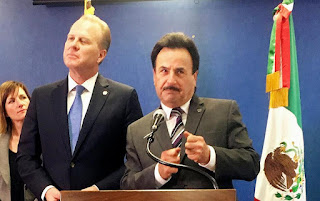 San Diego's Kevin Faulconer and Tijuana's Juan Manuel Gastelum didn't mention Trump or Mexican President Enrique Pena Nieto by name at a joint news conference, but their concern about growing tension between the two countries and its potential economic impact was evident in their remarks.

Gastelum said, "We have made a lot of progress over the years, but we know there is more work to do. We want to keep the momentum going, and to do that we must keep the relationship strong in light of some of the things that have been said outside of our cities."

Faulconer, a Republican who won a second term in a landslide election last year in a solidly Democratic city, has taken issue with Trump in the past. He said during the presidential primary that Trump hadn't earned his vote. When Trump signed an executive order last month to erect a wall on the 2,000-mile divide, Faulconer said, "We already have a safe and secure border in San Diego built by the federal government."

Faulconer pledged last year to serve his full term as mayor of the nation's eighth-largest city through 2020, but he continued to privately discuss a possible run for California governor in 2018. His message of stronger ties with Mexico would play well to a statewide audience.

San Diego was the busiest corridor for illegal immigration until the mid-1990s, when a surge in agents and fencing pushed traffic to Arizona. It has one of the most fortified stretches of border, with razor wire atop much of its fencing with Mexico.

Faulconer invited his Mexican counterpart and business leaders from both cities to discuss economic integration in a region of about 5 million people and the nation's busiest border crossing. Nikia Clarke, executive director of World Trade Center San Diego, a public-private partnership that promotes trade, said regional leadership has never been more important in a climate of uncertainty. "What this country needs right now is people who know and understand our regional reality - the regional reality of trade, of immigration, of co-production," she said.
Associated Press Immigration Society
Reactions: