British Airways (BA), Emirates, Air France and other airlines operating international routes in the country realised about N158.1 billion from the sale of tickets in 2012, according to an analysis of tickets sold by international airlines in 2012 by BusinessDay Research and Intelligence Unit (BRIU).

The report shows that for the two consecutive years under review, British Airways remained the first choice of international travellers, when measured in terms of the volume of proceeds it realised from ticketing in both 2011 and 2012. In 2012, BA made N33.5 billion from tickets sold, compared with N31.7 billion it made in 2011.

Emirates Airlines occupied the second position in terms of market share in 2012 having realised about N22.4 billion from the sales of tickets, compared with N30.5 billion made in 2011. Though it controlled 19.6 percent of the total market share in 2011, its market share dropped to 14.2 percent in 2012.

The sharp drop in Emirates’ market share was attributed to the rising patronage Etihad and Qatar Airways got in 2012. Etihad made N2.5 billion just as Qatar Airways realised N8.2 billion in 2012.

Of the 20 airlines covered by our analysis, seven recorded more sales in 2012 than they recorded in 2011. Interestingly, Turkish Airlines is beginning to challenge the traditional heavyweights on international operations because it posted the best performance, recording 107 percent increase in ticket sales between the years under review. In monetary terms, it sold N3.6 billion worth of tickets in 2012 up from N1.7 billion in 2011. Other up-coming airlines like Egypt Air, Air France, Saudi Arabian and Ethiopian Airlines performed creditably, as they increased their ticket sales by 33 percent, 23 percent, 22 percent and 22 percent respectively when compared with 2011 figures.

On the other hand, the tickets sold by eleven airlines nosedived, of which the worst hit was Iberia Airlines.

However, for the 20 airlines analysed, the cumulative proceeds realised from ticket sales last year averaged about N13.1 billion on monthly basis and 2 percent higher than the N155.5billion recorded in 2011.

This is also true for the Federal Government which raked in N7.9 billion through 5 percent generation from the sales of tickets and that was slightly above the N7.8 billion earned in 2011.

This positive growth in ticket sales in Africa in 2012 aligned with experts opinions in Air Transport Market Analysis, a publication of the International Air Transport Association (IATA).

Asia-Pacific airlines were most affected, seeing contraction of 5.5 percent in 2012. The exceptions were Middle Eastern and African airlines, with growth of 14.7 percent and 7.1 percent in 2012, supported by new trade lanes and developing trade links between Africa and Asia.”
Blog Continent Business Day News Desk Society
Reactions: 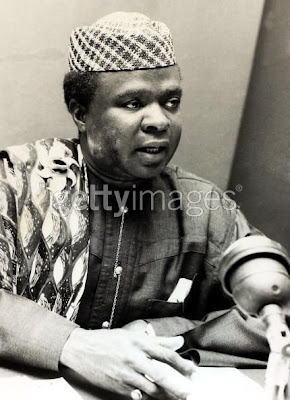 The following is an abstract from ITN on Chief Akpan Bassey's Interview with the press conducted August 31, 1967, in London, England, asking Britain to be mediator in peace talks with the Nigerian federal government.


Lead in Q: Who would you like to act as mediator?

Akpan Bassey: Well, I have every confidence that Britain could be a possible mediator, failing that America....

Q: But you've accused the British of siding with the Federal Nigerian Government, can you expect her to mediate in these conditions?

Akpan Bassey: It is not too late for Britain to withdraw and then to come in with us, we still have confidence in Britain and that Britain can still track back what has happened in the past, we are prepared to allow it, and then go on with the....

Q: But you have said that Britain has sold arms to the Federal Nigerian Government, does this accusation still stand?

Akpan Bassey: It is not a matter of - it is true, it is a fact that Britain sold arms, and they've admitted that by…