Crossing The Mediterranean: Risking One's Life In Exchange For Hope 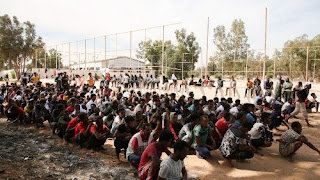 Detention center in Libya. Image via The Vatican
Following the death of 22 migrants in the Mediterranean, Fr Patrick Etamesor, West Africa coordinator for JRS, describes why young people choose to leave their homes and risk their lives at sea.

The situation is “tragic”, says Fr Patrick Etamesor, referring to the most recent loss of lives in the Mediterranean Sea.

All 22 of Tuesday’s victims were from Mali, as were the majority of the 61 survivors, ‘rescued’ by the Libyan coast guard and taken to the mainland.

Fr Patrick Etamesor is West Africa Coordinator for the Jesuit Refugee Service (JRS). Speaking to Vatican News, he highlights that these people, are “just normal people.” By ‘normal’, he explains that they are often young men and women, teenagers, “who see no hope in their circumstance.”
Fleeing from what?

The situation in Western Africa is difficult. The Sahel is ridden with extremist violence, poor governance and constant changes in power, says Fr Patrick.

Then there is climate change, which affects the whole region, and people would much rather “undergo this perilous journey rather than stay where they are."

They are aware of the risks, says Fr Patrick, and “sad as it is”, he adds, “a lot of them tend to die, never arriving at their destination.”

But news of deaths in the Mediterranean does not always reach back home, says Fr Patrick.

"In some cases, families are still waiting for the return of their sons and daughters”, believing that their children have gone overseas and that they are alive and working, when in reality “a lot of these men and women have lost their lives travelling, but with nobody around to account for them.”

This is the harsh reality highlighted by Fr Patrick, who notes that it depends on the situation, and that “there are those who are aware and those who are not”.
Raising awareness

In the context of Mali, Caritas is deeply engaged in ensuring that these emigration patterns are somehow managed.

Awareness is being raised, and organizations are “making sure that people are more familiar with the risks these kinds of journeys pose to them and their loved ones.”

Although the sensitization is present, says Fr Patrick, “it is not enough”, because “as things stand, just looking at the economic catastrophe unfolding, globally, and the risk of famine you can understand that people feel that despite the risks shown to them, leaving is still their best option."