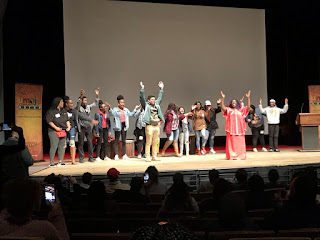 AIS having student join them on stage for a dance. Image: Amy Sarmiento.

BAKERSFIELD (THE RENEGADE RIP)--Bakersfield College hosted a conference event to honor Black History Month on Feb 8 in the Indoor Theatre. This event was hosted by Umoja Community (ASTEP) which stands for African-American Success Through Excellence and Persistence.

Umoja is a word in Swahili meaning unity, which is the main mission of this program. Their focus is on helping students in academic and personal successes as well as integrating African American culture.

The Black History Conference Event was themed Black Excellence and emphasized the importance of empowering African American students to be successful individuals and pursue their goals.

Most of the attendees were from different high schools throughout Bakersfield such as North, Independence, and East High School. The theatre was filled with young high schoolers and their chaperones and Bakersfield College’s Umoja community club.

African Soul International (ASI) performed a show filled with color, energy, and vibrant music that portrayed African art. They are a nonprofit organization who focus on education for the youth, positivity and encourage their empowerment across educational institutions around the world. They present their cultural arts event to schools and universities.

ASI was also featured in the 2014 music video “Say Yes” by Michelle Williams, Beyoncé, and Kelly Rowland. They focused on educating the audience about Africa and the misrepresentation that people tend to have, specifically referring to it as a continent of poverty.

“If we only think about Africa as poverty, then every time you see yourself in a mirror you think that’s where you’re from,” stated by ASI.

The main speaker of this event was Reverend Charles Dorsey who has degrees in Anthropology, Theology and his doctorate in Organizational Leadership. He is an author, motivational speaker, and a Reverend in Orange County.

Dorsey began his speech by engaging with the audience by doing interactive activities and throwing handfuls of mini chocolate bars into the crowd, causing an eruption of excitement among a group of high schoolers.

As he went on, he touched on subjects that were common in the African American community and talked about his past experiences such as not having his father during his childhood.

“I know what some of you guys are going through because I have been through them myself, but let me tell you that you will get through it and become a better person than you ever imagine,” said Dorsey.

He also spoke about the importance of being motivated and setting goals to become an accomplished individual. He encouraged students to find what they are passionate about and put all of their energy into it to leave their mark in the world.

Since there were many high schoolers attending this event, one of the main messages were directed towards motivating many high schoolers to join the Umoja club on campus or other college campuses and empower more African American students by being united.
Africa California News Desk Society Southern California