The Latest: Maduro Orders Venezuelan Diplomats Out Of US 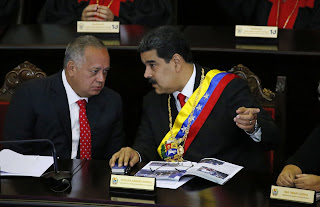 Venezuelan President Nicolas Maduro, right, speaks with Constitutional Assembly President Diosdado Cabello at the Supreme Court during an annual ceremony that marks the start of the judicial year in Caracas, Venezuela, Thursday, Jan. 24, 2019. Cabello and other high-ranking allies pledged to stand behind Maduro and denounced Juan Guaido who declared himself interim president on Wednesday. (AP Photo/Ariana Cubillos)